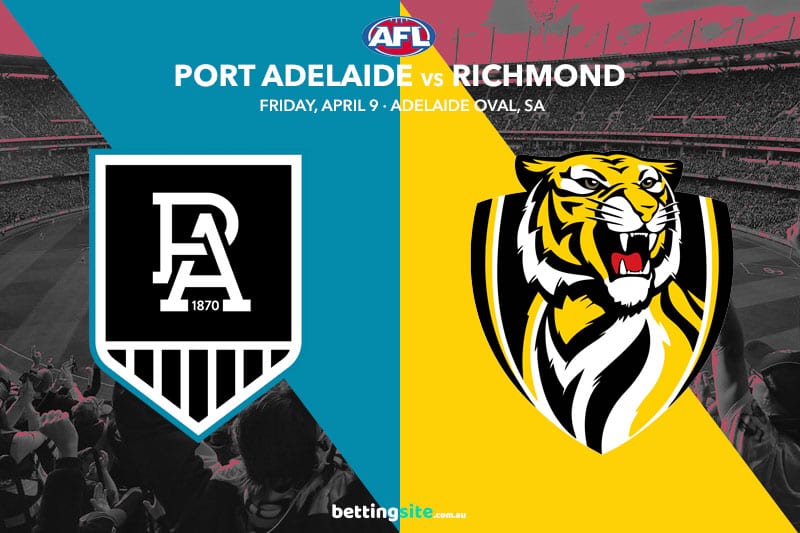 Round four of the 2021 AFL Premiership season looks fantastic on paper, and the biggest matchup of the week will see the Port Adelaide Power host the Richmond Tigers at Adelaide Oval this Friday night.

Ken Hinkley and the Power will seek revenge against Damian Hardwick and the Tigers as these teams face off for the first time since Richmond’s win in the preliminary finals last year.

Currently sitting first and second respectively in the 2021 AFL Premiership betting market, the Tigers and Power are both looking to bounce back from surprise defeats last weekend.

Richmond superstar Dustin Martin is the current favourite in the 2021 Brownlow Medal betting, but Port Adelaide’s Travis Boak is not far behind him.

With mouth-watering contests around the ground and plenty at stake for both clubs, you cannot find a better match in round four than this Friday night blockbuster.

The big forwards Charlie Dixon and Tom Lynch look like the keys to victory for their respective sides this week. Both players sit inside the top five in the Coleman Medal race, and they should add a few to their tallies this week. We think Dixon and Lynch will combine for at least six goals on Friday, and one of the pair could explode for a massive bag.

The Power have become very dangerous out of the midfield this season, as Peter Ladhams and Scott Lycett are giving their midfielders first use out of the ruck on a regular basis. The Port Adelaide wingmen have both started the season well, with Karl Amon and Xavier Duursma both averaging just under 20 disposals per match. The Power are a good side to back in the disposal markets.

Dustin Martin has started the season in fine form, but he did drop off slightly against the Swans last week. Martin averages a tick over 25 disposals per game against Port Adelaide and doesn’t often play two ordinary ones in a row, so he could be set for a big night. The Tigers are not the most reliable in front of goal this season, so it might be worth considering the unders in the total points markets.

Ollie Wines to get 30+ disposals

Given Ollie Wines has already collected over 30 disposals twice this season and only missed that mark by four touches last week, we think the online bookmakers are paying well overs here. Wines had 38 touches in round two at Adelaide Oval, which is where he collected a game-high against the Tigers in last year’s preliminary final.

Kamdyn McIntosh will miss this match with a concussion he sustained last week, which will give a big boost to the strong Port Adelaide wingmen. We think the Power are desperate for revenge and should bring their A-game to this match as they look to make up for their loss to the West Coast Eagles last week.

There may be a new premiership favourite by the end of the week, as the Power should win this clash. All of the last three matches between these sides have been low-scoring games, which is why we are going unders on the total match points. Trust in Ollie Wines and Travis Boak to feed Charlie Dixon and get Port an important win here.