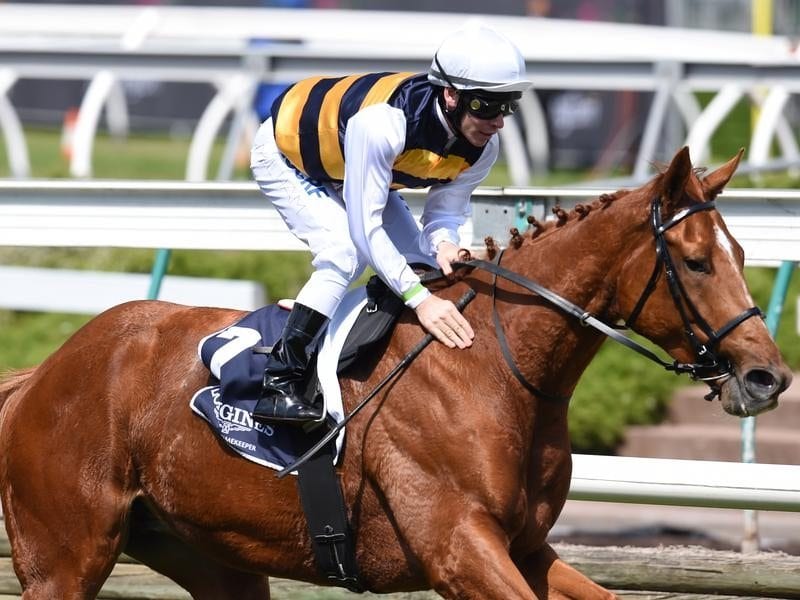 Former French horse Gailo Chop will be one of three Darren Weir-trained horses in the Makybe Diva.

Leading trainer Darren Weir will have at least three runners in the Makybe Diva Stakes at Flemington.

Black Heart Bart, Humidor and Gailo Chop will represent the stable in the Group One 1600m event on Saturday.

Weir said he would consider adding to the nomination list before Monday’s deadline.

“They’re the three that will definitely be running,” Weir said.

“All three are in good shape at this stage and they’re looking to get out to the mile and even further.”

Black Heart Bart was a last-start second to Vega Magic in the Memsie Stakes at Caulfield on September 2 with Humidor, under Mark Zahra, finishing eighth.

On the same day, Gailo Chop took out the Penny Edition Stakes at Morphettville, his first win since the 2015 Mackinnon Stakes at Flemington for French trainer Antoine de Watrigant.

Gailo Chop had two international starts after that victory and injured a tendon when seventh in the Dubai Sheema Classic in March last year.

The seven-year-old made his return in the P B Lawrence Stakes at Caulfield last month before winning in Adelaide.

“He ran a bit below what we expected first-up but bounced back second up,” Weir said.

“He was a bit ring-rusty at Caulfield.

Hartnell will make his second Melbourne spring appearance in the race named for the three-time Melbourne Cup winner having won the P B Lawrence on August 19.

He had a gallop at Moonee Valley during the week with trainer James Cummings’ Melbourne foreman David Charles saying the gelding was in great order.

A decision on whether Godolphin tackles the Caulfield Cup or Cox Plate with Hartnell will be made after he runs on Saturday.