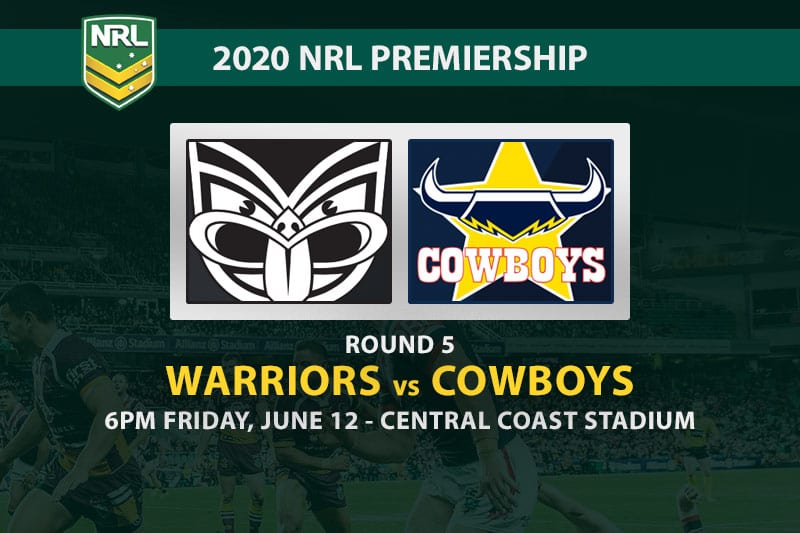 Warriors vs Cowboys NRL Round 5 preview

The North Queensland Cowboys have a great home advantage in the 2020 NRL Premiership season with teams having to fly several thousands of kilometres on game day, but what about when it’s their turn to travel?

The 2,000km from Townsville to Gosford is not a straightforward journey, with the closest commercial airport 90 minutes’ drive away.

On this factor alone, the $2.75 head-to-head price for the New Zealand Warriors looks to hold plenty of value.

The travel factor will leave the Cowboys prone to a slow start, so an option that should be looked at is Warriors to lead between 5-8 points at halftime paying $7.50 with Sportsbet.

Jason Taumalolo missed last week’s game against Cronulla with a knee issue and his impact may be limited if any issues still linger.

While the Warriors were humbled in their 26-0 loss against Penrith, they don’t have to look far for their last good performance at Central Coast Stadium – an 18-0 blowout of the Dragons in round three.

On that day, they set a record for most complete sets in a game with 45/47 completions, compared to just 31 of 40 in their loss to Penrith.

If NZ can win the possession battle against a travelling Cowboys team, they will be able to slowly wear them down.

While the $7.50 for the halftime leading margin looks tempting, so does the option for the Cowboys to win by 6-10 points at $6.

The travel factor has the makings of the Warriors getting out to a lead before the dreaded second stint of Taumalolo drags the Cowboys to a win.

In North Queensland’s last win away from home in round two against the Bulldogs, the margin was eight points and the line of -6.5 is indicative of this.

Best bets for Warriors vs Cowboys

New Zealand Warriors to lead by 5-8 points at halftime