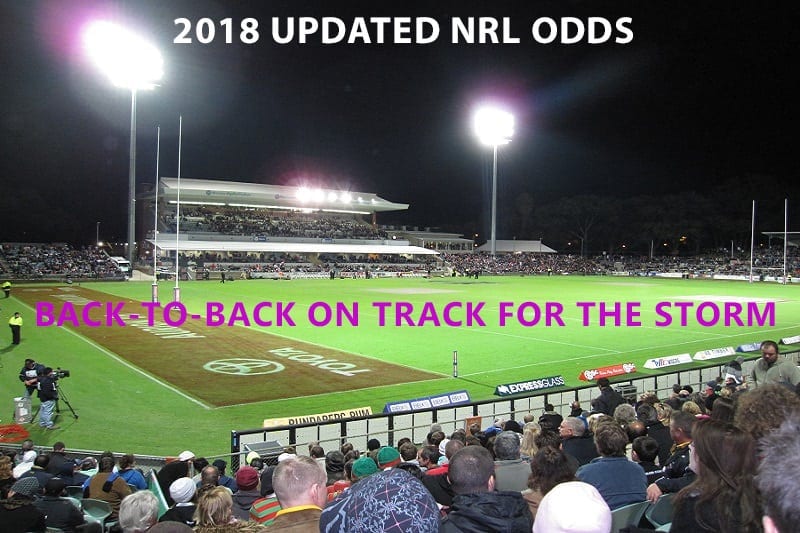 THE Victorians might be outnumberd three to one heading into the penultimate weekend of league action, but the Melbourne Storm are the standouts for the 2018 crown in the eyes of the punters.

Last year’s champions are the best supported team in the market at the $2.75 quote, the shortest any team has been for the NRL premiership this season.

The Sydney Roosters are on the next line of betting at the $3 quote while the Rabbitohs ($4) and the Sharks ($8) round out the remaining teams in contention.

The Storm are also the shortest priced team heading into preliminary final weekend. The home side are at the $1.37 quote to beat the Sharks on Friday night at AAMI Park.

The news keeps getting better for the premiership favourites with a pair of key inclusions likely to be ready for Friday night’s clash.

Melbourne will be bolstered by the returns of Australian Centre Will Chambers back from a three-game suspension and New Zealand prop Nelson Asofa-Solomona, who returns after missing a month following an ankle injury.

Chambers and Asofa-Solomona should slot straight back into the starting line ups, and Storm speedster Josh Addo-Carr believes the centre will in particular provide some much needed assurance on the ball.

“The biggest thing Will brings is experience and energy,” Addo-Carr said.

“He carries the ball really well for us and it’s good to have him back. We definitely missed him but in saying that we have had people fill in and do their job the best they can.”

The opposite side of the coin for the Storm’s opponents, club stalwart Paul Gallen is no certainty to play after he was forced from the field in the Sharks heart-stopping win over the Panthers over the weekend.

Gallan told reporters he couldn’t lift his arm in the aftermath of the match and now faces a race against time to prove his fitness heading into Friday night.

Despite the admission from Gallan, Addo-Carr said the Storm will be preparing for the former NSW captain to take to the field.

“He is a very tough player and we expect him to play,” he said.

“We just can’t worry about one player, we have to worry about the whole squad as they are very dangerous. I don’t think there is any injury that will stop him.”

The Storm host the Cronulla Sharks on Friday night at AAMI Park. Kick off is from 7.45pm.