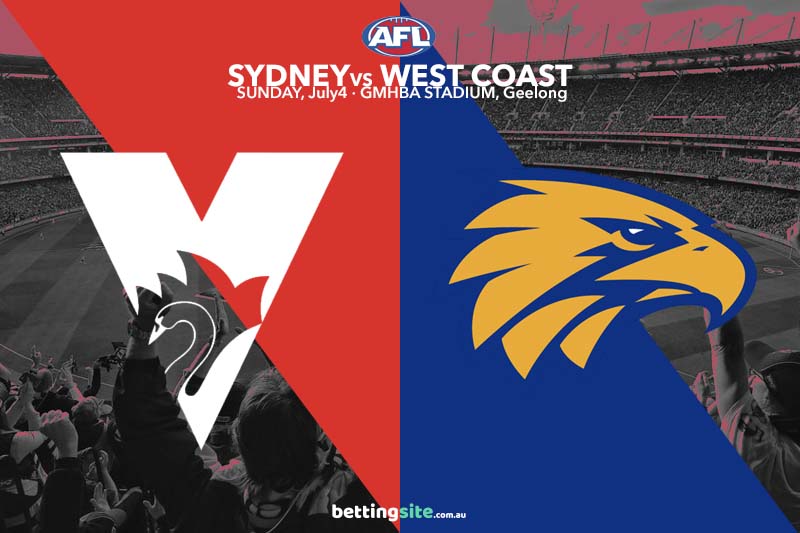 Sydney and West Coast will battle on neutral territory on Sunday, when they face off at GMHBA Stadium in round 16 of the AFL Premiership season.

Both the Swans and Eagles fled their home states to avoid covid restrictions and lockdowns, which is why they have been scheduled down in Geelong for this important battle.

The Swans and Eagles sit sixth and seventh respectively on the AFL ladder, but their positions in the top eight are far from certain. Whoever loses will fall back into the pack, as a number of teams are pressing towards a September appearance.

Liam Ryan accepted a one-match suspension last week for a high bump against the Bulldogs and will miss this clash, with Zac Langdon and Jermaine Jones the likely replacements.

The Swans may bring back Sam Wicks after the second-year player served his one-match suspension, while Colin O’Riordan could replace the omitted Kaiden Brand.

The biggest factor heading into this clash is the West Coast Eagles’ horrible record at GMHBA Stadium, where they have lost their last six matches by an average of 65 points. The Swans have a very good record at Kardinia Park, managing three wins from their last four visits.

The midfield battle is extremely important, as the winner in the middle could dictate who wins the match. Oliver Florent is having an impressive season in his fifth year for the red and white, and we think his pace on the outside will be valuable for both the Swans and punters alike.

Lance Franklin loves playing against the Eagles because of their unique defensive structures.

The Eagles love to intercept incoming kicks with the likes of Jeremy McGovern and Tom Barrass, but the reason they can set up well is because they do not follow opposition key forwards up the ground.

Since Buddy Franklin is a prodigious kick from outside the arc, he always pushes higher up the field and could punish the Eagles with long shots at goal.

Franklin has kicked 15.10 in his last three outings against West Coast and will be one to watch this Sunday. We think Jeremy McGovern might have his hands full.

The Swans lost to Power on the road by just 10 points last weekend, which could have gone either way in the last quarter. We think the Swans are building some quality momentum despite losing their last two contests, which should result in a large win this Sunday against the Eagles.

Oliver Florent to get 20+ disposals

There are plenty of A-grade midfielders who will play this Sunday, but we think the best value in the market goes to Florent. The 22-year-old has collected 20 or more disposals in seven matches this year and amassed 23 touches against the Eagles in 2019. Florent averages 18 disposals at GMHBA Stadium and should flourish on the wing this weekend.

Oliver Florent to get 20+ disposals

Lance Franklin will dominate up forward with three or more goals against the Eagles this Sunday, while Ollie Florent will be influential on the outside and collect plenty of disposals. Those two legs combined with a solid win to the Swans will net you $9 value with Sportsbet.