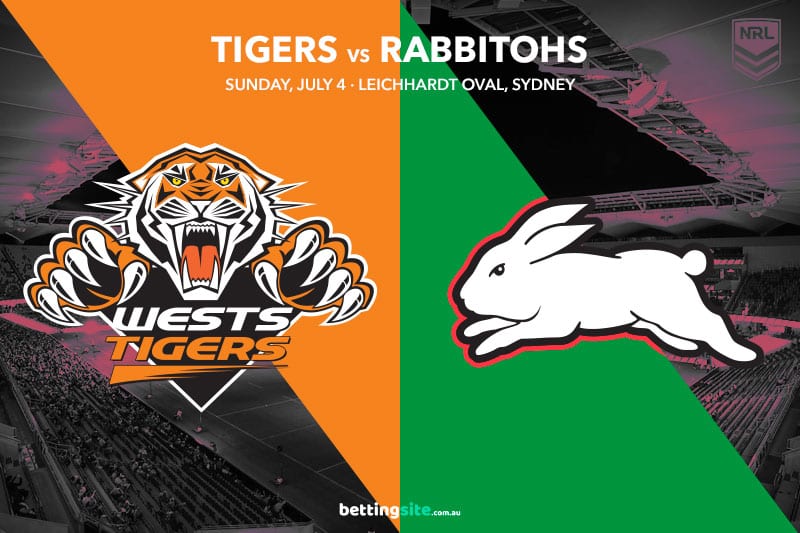 The Wests Tigers will attempt to rectify one of their darkest days when they take on the South Sydney Rabbitohs at Leichhardt Oval in Round 16 of the 2021 NRL Premiership.

One of the NRL’s historic grounds would usually be filled to capacity for this clash, but the COVID-19 lockdown means no fans will be in attendance to cheer on either side.

The Rabbitohs have been terrific in their last three wins and come in as the $1.12 favourite with NRL bookies, which is bad news for the Tigers seeing as Souths have won their last 12 consecutive games as the punters’ pick.

The Bunnies will have Latrell Mitchell, Damien Cook, Cameron Murray and Dane Gagai all return unscathed from Origin II, while Wests will get Adam Doueihi back at centre.

The Tigers have disappointed on almost a weekly basis in 2021, but they did push the Bunnies all the way to golden point back in Round 6, so perhaps they can take some confidence from that performance into this game.

Trying to come up with a situation where the Tigers win is almost impossible, but there is money to be had in some other areas. He is a fan favourite and has scored in five of his last six games at Leichhardt Oval, so why not back Luciano Leilua to score at any time for a whopping $5.50? Those are odds you simply can’t ignore. Daine Laurie is also looking to score at Leichhardt for the third consecutive game and he is paying a handsome $3.25, so that is another one to keep an eye out on.

The Bunnies are being given a -20.5 point head start and if they show up and play as they should they will cover that comfortably. The $1.90 return on that is money for jam. Dane Gagai is $12 to get the first try for the Bunnies and he has form, scoring the first try in two of the last three games between the two clubs. Latrell Mitchell’s form has been nothing short of outstanding and he is $1.72 to score at any time. Mitchell has scored in the last four away games he has played for the Rabbitohs and you’d be a brave person to back against him. The other to watch is obviously Alex Johnston on the left wing. His try scoring form in recent weeks has been absurd, scoring two or more tries in Souths’ last three games. He is a short $2.25 to do the same and even at that price you will see a lot of punters get on.

Adam Doueihi has been the best player for the Tigers all season, and he is going to have to produce a masterclass for Wests to have any chance at victory. At right centre he is going to be the key decision-maker against the electric South Sydney left edge, and in particular Latrell Mitchell. The form of Mitchell at Origin level has been frightening, and at fullback for Souths he has been first class, so for Doueihi to make all the right decisions and slow down the attack is going to take a special effort. He will determine if Alex Johnston has a big game as well as Dane Gagai, but coming up with a plan to stop Latrell is one thing and carrying it out is another.

The Rabbitohs will win in a landslide and cover the -20.5 line. The Tigers have done some soul searching, and their admission that they are far too quiet compared to the good teams in the competition was concerning. They are 15 games in and led by a veteran of 12 Tests and 14 Origins, as well as having a premiership-winning coach, so why all of a sudden should they improve so dramatically if they didn’t realise in the first 15 weeks they need to communicate?

Souths -20.5 and Alex Johnston to score a double with Latrell Mitchell and Dane Gagai to score at any time pays $9.75 with Sportsbet.