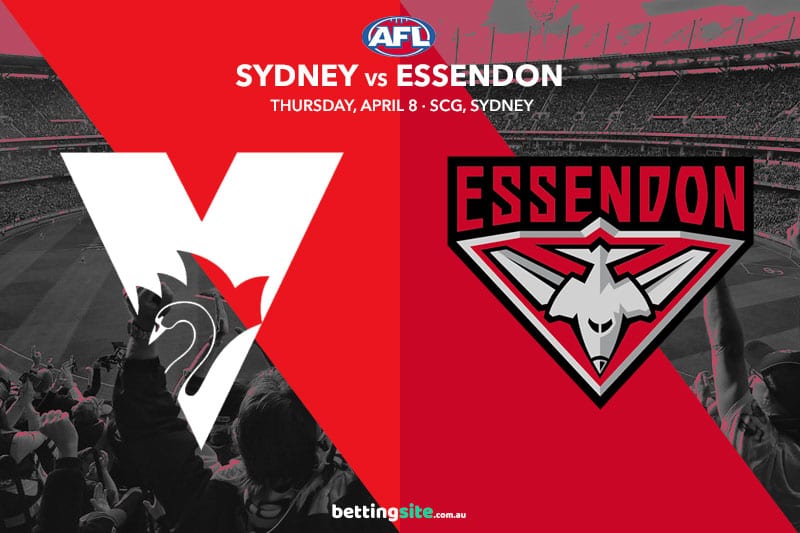 Two of the youngest and most exciting teams in the competition will kickstart round four of the 2021 AFL Premiership when the Sydney Swans and Essendon Bombers meet this Thursday night at the SCG.

John Longmire’s decision to back his youngsters has worked a charm for the undefeated Swans, who have beaten two of 2020’s top four sides in the first three weeks of the season.

Nik Cox and Archie Perkins went to the Bombers with picks no.8 and no.9 respectively in the 2020 draft, and both showed plenty of promise in Essendon’s stunning 75-point win over St Kilda last Saturday.

With all these young prospects putting on a show for both sides, it will be interesting to see who comes out on top at the SCG this Thursday night.

The inside midfield battle between Luke Parker and Andrew McGrath should be hot, as the two tough nuts will dig in for the entire contest. Parker averages over 25 disposals per game against the Bombers and comes into this game in good form. McGrath is the grunt man in the Essendon midfield alongside Zach Merrett and Darcy Parish, but whether he can hold down Parker is another story.

No team has kicked more goals this season than the Swans, who are averaging 18 per game from their first three matches. You should look to target the match points markets for this one, as Sydney should put another big score together against a new-look Essendon defence this Thursday night. The Swans tend to share the load in terms of disposal collectors and goal scorers, so be wary of investing too much in those AFL betting markets.

The Bombers kicked 22 goals in round three against the Saints and controlled the game from start to finish. Their midfield, backline and forward six all dominated possession, with Jordan Ridley gathering 35 disposals from his defensive post. The Dons have won three of the last four contests against Sydney and looked much-improved last weekend, meaning punters should consider the handicap markets at online bookmakers.

The current favourite to win the 2021 AFL Rising Star award is Errol Gulden, who is yet to put a foot wrong so far this season. The young Swan has kicked four goals while averaging nine marks per game, despite only standing at 176cm. The Bombers concede a majority of their goals to small forwards, meaning Gulden and Tom Papley should have a day out.

Lance Franklin should return for the Swans this week after resting in round three, and that alone should be enough to get them over the line against the Bombers. That said, Essendon showed enough against the Saints to suggest the margin should not blow out beyond the 40-point mark. The Swans have won seven of their last eight SCG clashes with the Dons, but it was Essendon that won there last season.

With Franklin set to return and James Rowbottom also a chance to play this Thursday, it is hard to see the Swans losing this match, but we still think the Bombers will do enough to keep it interesting. Gulden and Parker should have a big impact on the stat sheet as Sydney goes 4-0.