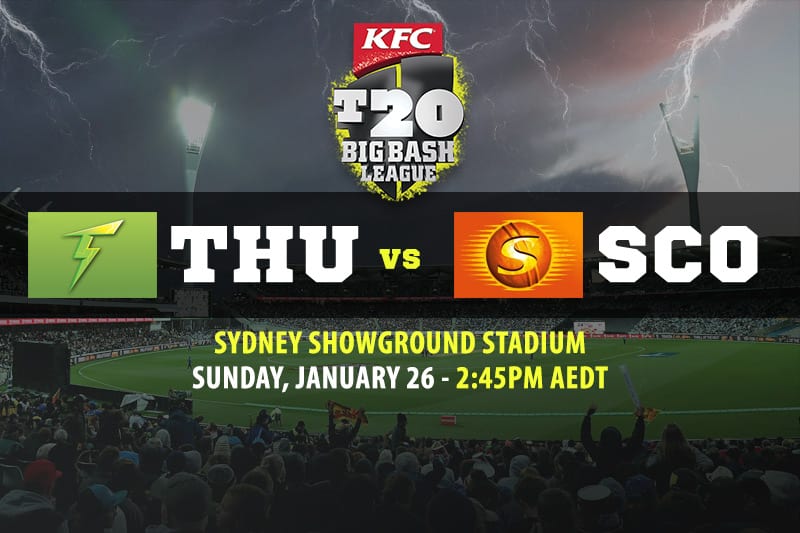 Australia Day cricket will come in the form of the Big Bash League as the Sydney Thunder host the Perth Scorchers at Sydney Showground Stadium.

There isn’t a more important match on the calendar than this upcoming battle, as the BBL finals cut-off looms as the biggest incentive to win.

The Thunder must win this match in order to stay inside the top five, which qualifies them for the finals, but the Scorchers won’t give up their position without a fight.

Both teams are considered as dark horses heading into the finals, as the Melbourne Stars, Sydney Sixers and Adelaide Strikers currently sit as the big three.

A win in this match could change the opinions of my pundits and bookie alike, but it would have to be a telling victory.

Alex Hales to score 25+ runs @ $2 with BetOnline
With an average of 34 runs per innings, Alex Hales has been one of Sydney’s best runscorers, with Usman Khawaja and Callum Ferguson the only other consistent batsmen for the Thunder. Hales previously made 85 against the Scorchers, and we think he can do it again. We have him at 25+ at $2, but you can also back him in for top runscorer at $4.50.

Mitchell Marsh to hit 2+ sixes @ $3 with BetOnline
Only two players have hit more sixes than Mitchell Marsh this season, being Marcus Stoinis and Chris Lynn. Marsh did not get a chance to progress in his innings last time these teams met, as he only faced a single ball, but we think he can come in and impact immediately this time.

Daniel Sams to take 2+ wickets @ $2.25 with BetOnline
Still leading in the wicket-taking standings, Daniel Sams has arguably been the most damaging player in the BBL this season. If he can finish strongly here and help the Thunder secure a finals berth, it will be hard to look past him when singling out the best bowler of the campaign.

Fawad Ahmed to take 2+ wickets @ $2.75 with BetOnline
We like the way Fawad Ahmed has taken on this season, despite being one of the oldest players in the league. Ahmed has taken 14 wickets in a very profitable season for the Scorchers, as he has been their best bowler all season long. His consistency has shone through and we think he will be rewarded in this match.

Sydney Thunder to win @ $1.90 with BetOnline
This is one of the hardest matches to tip all season, but our gut feeling lies with the Sydney Thunder. All it takes is one good innings from either Usman Khawaja, Alex Hales or Callum Ferguson to get them going, while the Thunder should do some damage with the ball in hand.