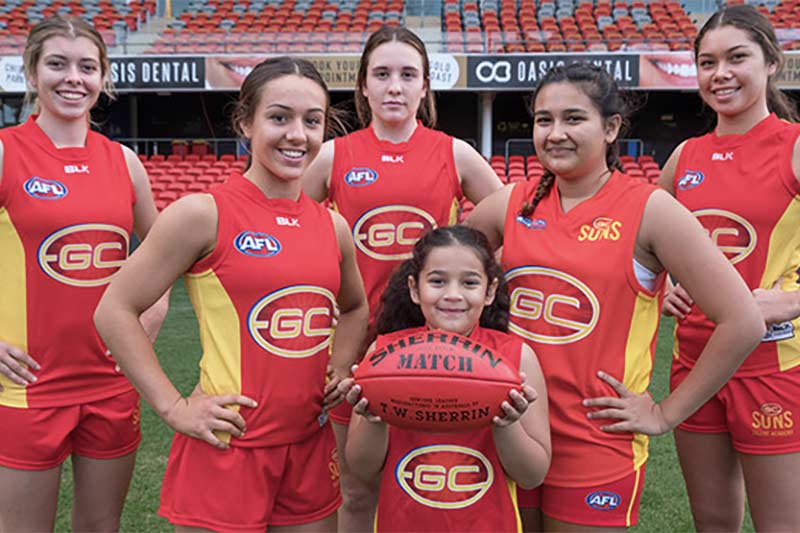 THE Queensland government has congratulated the Gold Coast Suns on their inclusion in the AFLW.

They are among six new teams that will join the nascent women’s division over the next three years.

Kate Jones, the state’s acting minister for women, said the addition of the Suns was a “fantastic boost” for Australian rules football north of the Tweed.

“The AFLW took the nation by storm in its inaugural season, surprising many with the massive level of support for the women’s game,” Ms Jones said.

“Seeing these elite sportswomen not only taking on the nation’s best but also getting the public and media recognition they deserve was inspirational.

“And nobody will soon forget the wonderful effort of the Brisbane Lions women’s team to reach the Grand Final of the very first AFLW season.

“An AFLW team at the Gold Coast Suns is a fantastic boost for Junior Girls AFL in the region, where clubs such as Southport, Burleigh and Tweed Coolangatta have been leading the way with a massive growth in player numbers.”

Gold Coast’s arrival in the AFLW comes on the back of another disappointing season for the men’s team.

The Suns sacked head coach Rodney Eade en route to finishing 17th in the league, above only the Brisbane Lions.

Despite that unwanted quinella, Queensland sports minister Mick de Brenni believes the Lions’ performance in the inaugural AFLW season is an indicator of good things to come.

“At the beginning of the inaugural women’s season the southern commentators and pundits said the Lions were destined for the wooden spoon and they were dead wrong.

“The fact of the matter is that women’s footy in Queensland has been as strong as anywhere in the country for a long time.

“The Suns are a great club and are a fantastic choice for expansion. I can’t wait to see a Q-Clash Grand Final in 2020.”

Wednesday’s announcement in the lead-up to the 2017 AFL Grand Final means the women’s division will expand from eight teams to 14 by 2020.

Geelong and North Melbourne will join the competition in 2019, with Gold Coast to follow alongside Richmond, St Kilda and West Coast a year later.

Essendon and Hawthorn missed the cut despite strong bids, but both will have the opportunity to reapply for the 2021 season.