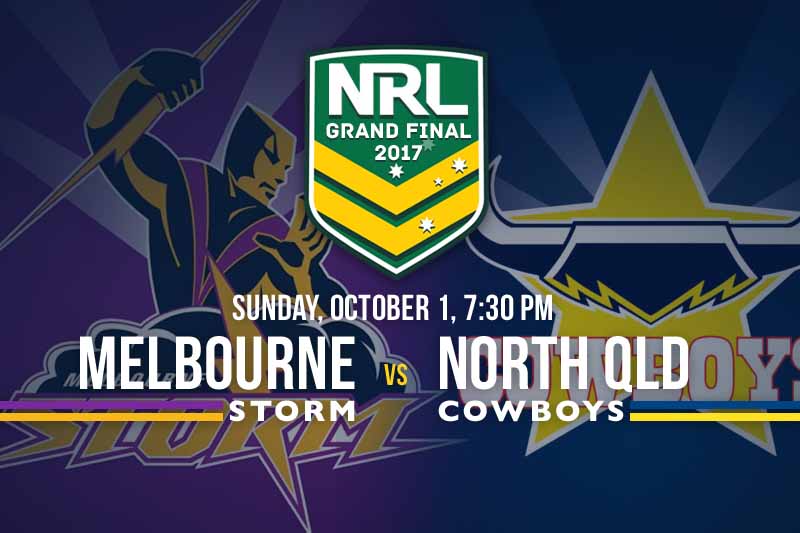 THE 2017 NRL season has come down to two teams with the Melbourne Storm taking on the North Queensland Cowboys this Sunday night.

The Grand Final is always a great spectacle and punters have already climbed into the head-to-head and points spread markets, but we’re focusing this article on the Clive Churchill Medal winner for 2017.

The Clive Churchill Medal is awarded to the Man of the Match and there have been some champion winners over the last 10 years. Past winners include Scott Prince, Darius Boyd, Sam Burgess, Johnathan Thurston and 2017 contender Billy Slater who won back in 2009.

We have the best Clive Churchill Medal tips for the Storm vs. Cowboys Grand Final and punters will get the chance to bet on some of the game’s best NRL players.

The market below is from CrownBet.com.au which has the best Clive Churchill odds available*

The 2017 Clive Churchill Medal market is being dominated by either Queensland or international players.

The top five players in the betting are Queensland Maroon stars and the next five players are New Zealand internationals. The first player from NSW in the betting is Dale Finucane at $51, so punters that are fans of league in Sydney are getting a rough deal in the final.

The big money has come for the Melbourne Storm players, given that bookmakers are expecting them to take out the game. The best-backed Cowboys has been Michael Morgan, who was recently named the NRL players Player of the Year.

We’re going away from the Melbourne Storm players and sticking with the feel-good story of 2017.

Michael Morgan has always been a quality player, but when Johnathan Thurston suffered an injury during the season, the Cowboys were expected to fold up and miss the latter stages of the season.

One player helped the Cowboys win three consecutive finals games and that was Michael Morgan. The Queensland and Australian representative went from capable replacement to one of the game’s brightest stars in 2017.

The inconsistencies which flawed his game in previous seasons have been ironed out and he’s controlling the Cowboys back line with great effect. Morgan is also doing it with Te Maire Margin alongside of him. Martin isn’t exactly a top player in the NRL and that makes Morgan’s performances even more credible.

The Cowboys will need to win for Morgan to win the Clive Churchill Medal, but he’s a good chance if the North Queensland side can pull off the upset.

The human wrecking ball of the NRL, Jason Taumalolo is the clear value pick for this Sunday’s Storm vs. Cowboys final.

The Kiwi international has been the best forward in the NRL this season and it’s no wonder he got a huge contract offer. Taumalolo is a no-nonsense player who rarely makes an error and that sets him apart from the other forwards of his nature.

He doesn’t look for the offload, but he also doesn’t turn his back into the defence. He powers through the middle and gives the Cowboys excellent go-forward ball for his backs to work with.

The spotlight is always on Jason Taumalolo, so with a Cowboys win and a big effort from their premier metre eater, punters taking Taumalolo at $11 should be in with a good sight.

How Cameron Smith hasn’t won a Clive Churchill Medal yet is beyond us. The Storm hooker has been pivotal in the last three Melbourne Storm Grand Final successes, but he’s had some stiff competition.

Teammate Billy Slater pipped him in 2009 and fellow Storm star Cooper Cronk did the business in 2012, but now it’s time for Smith to get some game-day recognition.

Smith is the leader of the Storm in every aspect. His play from dummy-half is the best in the NRL and his decision making and captaincy skills are second to none.

The golden boy of the NRL, Cameron Smith is long overdue the Clive Churchill Medal and given that he’s the raging hot favourite to take out the Dally M Medal on Wednesday night, it’s likely with a Storm win that Smith will be taking home the medal.

There’s no denying the Fijian winger’s talent and he’s not without a chance of being crowned the best player on the field this Sunday.

Vunivalu has the ability to score multiple tries in a game and although winger don’t typically get the credit they deserve when scoring, Vunivalu can make his own luck out on the wing.

He’s not just a catch and score-type of player. He creates opportunities for himself and the judging panel could give him a chance if he scores one or two vital tries for the Storm.

He’ll need a great game that includes at least two tries, but it’s not out of his reach by any means.