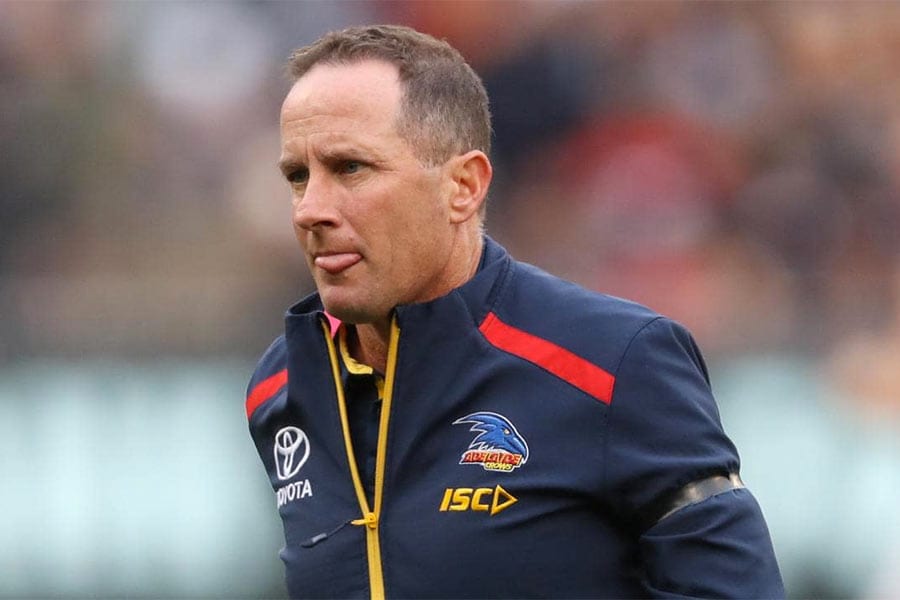 Don Pyke has parted ways with the Adelaide Crows after four years as head coach.

Pyke was a much-loved figure at the club, having taken the reins in 2016 after the sudden and shocking passing of Phil Walsh the year prior.

The former West Coast player took the Crows to an AFL Grand Final appearance and a minor premiership in 2017, but things took a turn for the worse from there.

Rumours leaked of a controversial training camp involving the Richmond theme song and blindfolds, and on-field performances suffered amid lingering speculation of unrest within the playing group.

Adelaide dropped from first to 12th in 2018 and missed the finals again this year, leading the club to commission an external review at the end of the home-and-away season.

Despite a lack of silverware, Pyke will go down as one of the most successful coaches in Adelaide’s history due to an all-time high winning percentage of 61 per cent with 56 wins, 36 losses and one draw.

He is the fifth head coach to lose his job in 2019 and the first to be sacked in the post-season, which means the Crows will not have the advantage of trialling an interim coach.

David Teague, Rhyce Shaw and Brett Ratten went on to secure permanent positions this year at Carlton, North Melbourne and St Kilda respectively, while David Hale had only one game at the helm with Fremantle.

That leaves the Crow and the Dockers as the only two sides without a gaffer, so there is plenty of overlap in the betting for the next Fremantle coach and the next Adelaide coach.

Ben Rutten has firmed from $3.25 into $2.75 outright favouritism for the Crows job since Sportsbet.com.au opened its market this afternoon. The former Adelaide defender has spent the season on John Worsfold’s staff at Essendon after a successful four-year stint at Richmond and has already been touted as a contender for the top job at the Bombers.

Another big mover is Scott Burns, whose price has shortened from $6 to $3.25 in a matter of hours. Having missed out on the West Coast gig when Adam Simpson was appointed in 2013, the Collingwood legend returned to his old club as a midfield coach and now works under Alastair Clarkson at Hawthorn. On credentials alone, Burns is an excellent prospect.

Michael Voss opened as the favourite at $3, but he has since eased out to $4. Voss coached the Lions during their dark times and currently works across town for Port Adelaide as a midfield coach. The 1996 Brownlow Medal winner has shown interest in every coaching role this year and will not have to move far if he gets the job this time around.

Ross Lyon’s name has been thrown into the equation once again now that his Freo days are done. The Crows have the capacity to be one of the league’s strongest sides and may to look to the most experienced head if they want to bounce back immediately. At $6.50 with Sportsbet, Lyon will certainly feature in the conversation.

Scott Camporeale stepped in as interim coach when tragedy struck Adelaide in 2015 and showed great signs in his 11 games in charge, winning seven matches. Despite coaching out the season, the former Carlton midfielder did not apply for the senior role in 2016 and instead returned as an assistant coach under Pyke. He could be the main man at $7.

In our eyes, the rest of the market is filled with long-shots and humorous selections such as Tex Walker and Ryan ‘Fitzy’ Fitzgerald at $41. Our choice for the role is Ben Rutten at $2.75 due to his previous ties to Adelaide and his experience as an assistant coach.

Latest odds for next Adelaide coach