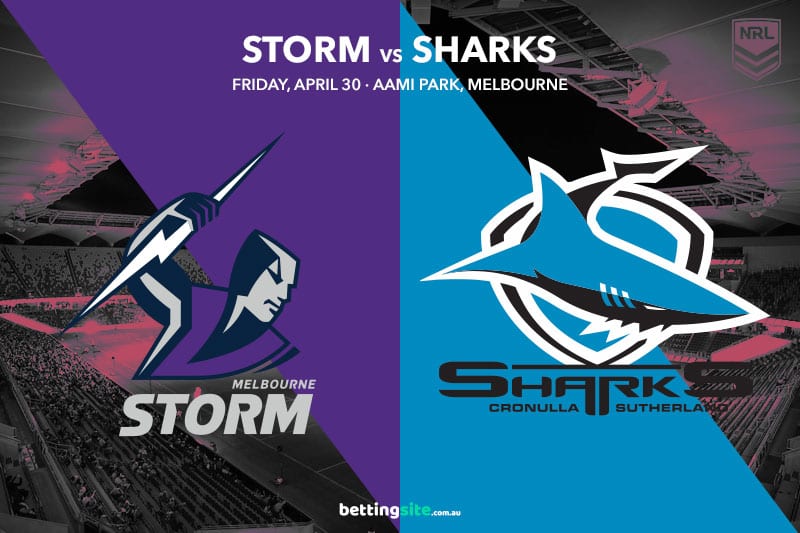 In years past this clash between the Melbourne Storm and Cronulla Sharks in round eight of the 2021 NRL season would be billed as a bitter affair, but the retirement of Paul Gallen and Cameron Smith has seen this heated rivalry lose some of the fire. The Storm have now won four in a row after their premiership defence got off to a rocky start, and the $1.12 quote suggests that streak will grow to five comfortably. The Sharks were forced to look deep in the mirror as a team last week after they lost to wooden spoon favourites Canterbury, but there is enough talent in this squad to make a game of this. The line is a whopping +17.5 for Cronulla, and plenty of punters will want a piece of that action.

The Storm have won three games in a row by 13 or more points, which is why you see the $1.53 price for them to repeat those efforts this Friday evening. Cronulla’s defence has shown plenty of vulnerability all season, and it’s another top-eight team, so the big margin looks a great option for a multi.

Even without Ryan Papenhuyzen, Melbourne still boast enormous strike power. Both Josh Addo-Carr and Reimis Smith got a double last week, we fancy Addo-Carr to repeat those efforts this Friday night. Don’t ignore Brandon Smith as an anytime tryscorer, or Nicho Hynes, for that matter, who also got on the scoresheet against the Warriors and recorded four linebreak assists and two try assists.

To lose in a heartbreaker and then be dusted up by the worst team in the competition gives a bleak outlook on the Cronulla Sharks over the past fortnight. Siosifa Talakai is going to miss at least a month due to suspension, but they will get Wade Graham back from concussion.

Just what coach Josh Hannay does with the trio of Chad Townsend, Matt Moylan and Shaun Johnson will be interesting to watch, but it shouldn’t affect Will Kennedy, who has been their best player in 2021 and is a great anytime tryscorer option. They can’t realistically win this game, but there is big appeal in that +17.5 line after being so disappointing last week.

Shaun Johnson led the NRL in try assists last season before an Achilles tear ruined his 2020 season, and for his second game back he will have to take on Cameron Munster. Johnson plays with fast feet and mercurial ball handling, while Munster plays at a very deliberate pace yet has enormous control of the contest. Both sniff out tryscoring opportunities in different fashion and beat opposition defences in contrasting styles, but they say styles make fights, and this should be great entertainment.

Melbourne will win comfortably at the 13+ margin. They’ll get to a handy lead and then coast by doing the simple things well. Josh Addo-Carr will bags another double on the left edge as the Storm win by 18 points.

The Storm 13+ margin with William Kennedy, Josh Addo-Carr and Jahrome Hughes to all score a try gets you a tasty $27.50 return at Sportsbet.