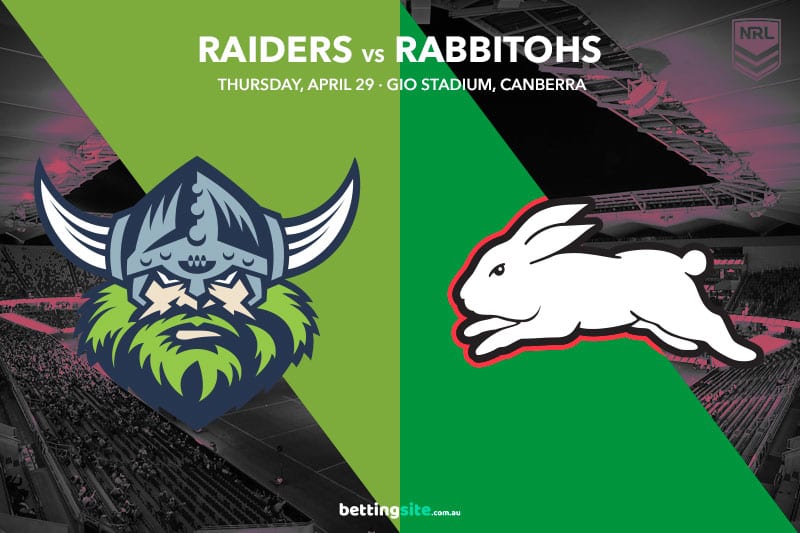 The South Sydney Rabbitohs will head to the nation’s capital on Thursday night to take on the Canberra Raiders in round eight of the 2021 NRL Premiership, and they’ll need to be wary of a talented squad licking their wounds following a poor three-week period. Canberra haven’t scored second-half points in back-to-back games and have blown leads of 21 and 18 points this season, so to get the win against a red-hot Rabbitohs outfit, their attitude will need to change in a hurry. To be getting well over $2 for the Raiders as the home team tells you all you need to know about their recent form, but the $1.62 for Souths should be snapped up before it begins to tighten.

For the Canberra Raiders to be at such a price for a home game at night is almost unheard of, especially over the last three seasons. Whatever has happened at half-time in the last two games needs to change, as being held scoreless after the break against the Eels and the Cowboys suggests there are some fundamental flaws to this side. Are they overrated? One feels this game will be the litmus test.

Bailey Simonsson will return on the wing after missing a game with concussion, but will Joe Tapine and Iosia Soliola be recalled by coach Ricky Stuart? Does Josh Papali’i come back into the starting side? There are plenty of questions which need to be answered, but the +3.5 start doesn’t look to be one of them. Tom Starling at hooker might provide the best value as an outsider to score a try, and we think Jack Wighton will answer the call and score for the home team.

Last week’s win over the Titans proved the Rabbitohs are never out of any contest because of their scoring power. Few teams in the competition facing a 24-10 deficit could have played as freely as they did to run out 40-30 winners, but it means the -5.5 line at $1.90 feels like the online bookmakers are giving money away.

You also know Wayne Bennett has done his homework and seen the questionable form of Jarrod Croker, so Campbell Graham and Jaxson Paulo shape as great first tryscorer options. Without Latrell Mitchell, Cody Walker will play the fullback role in attack for Souths, so make sure he is put in any multis as a tryscorer.

Benji Marshall wound back the clock against the Titans and pulled a vintage performance out of the hat, and Raiders five-eighth Jack Wighton is going to have to do the same for Canberra to be a chance at victory. Marshall may have been named in the centres, and it could well happen that way again, but make no mistake about the fact he will be opposite the reigning Dally M Medallist. Wighton’s numbers might suggest he played a decent game last week, but watching games this year it feels like he isn’t looking hard enough for the football when his team needs him most. Marshall bedazzled the Titans with some outrageous passing, whereas Wighton will need to use brute strength to control the game. Whatever the result, this clash promises to be must-watch TV.

Souths have too much strike power against a side who are defending poorly. A hallmark of the Raiders in the last two years has been their defence, but the Rabbitohs – even without Latrell Mitchell – could run up a score on them. The -3.5 line at $1.90 looks the safest option.

Rabbitohs -5.5 with Campbell Graham and Cody Walker to score at any time gets you $8.75 at Sportsbet.