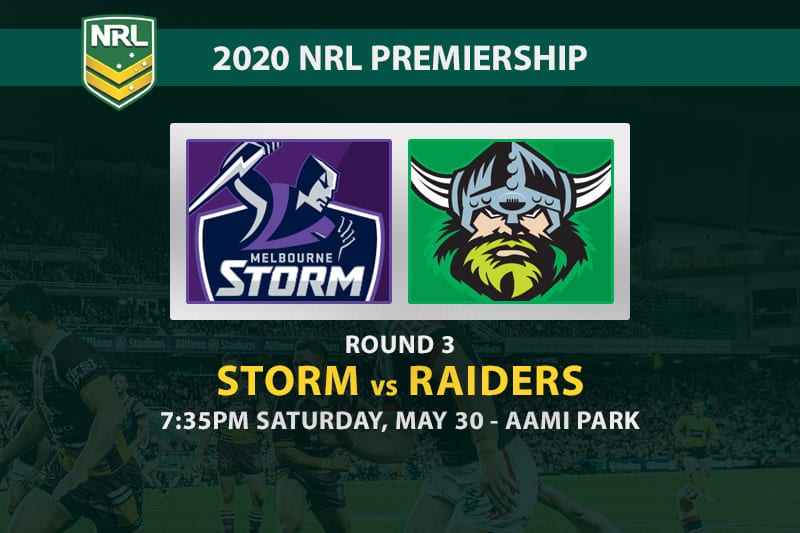 As the Melbourne Storm have never lost in round one under Craig Bellamy, many will argue they are certain to go 3-0 coming off a 10-week competition suspension.

However, the Canberra Raiders went to Melbourne twice last year and won both times – first with a stunning 18-point comeback in round 22, then a few weeks later in a dramatic qualifying final.

The Raiders hold no fears about playing in the Victorian capital and will fancy their chances after starting the year with comfortable wins over the Titans and Warriors.

A major concern for the Green Machine is the absence of star second-rower John Bateman, who is now fielding offers from other clubs after Canberra refused to upgrade his contract.

Raiders halfback George Williams faces his biggest test at NRL level, as he has never played a club team as brilliantly consistent as the Storm back in the English Super League.

He looked more than comfortable in the opening games, but this is a big step up in class and you can bet the Storm will make life uncomfortable for him. Kenny Bromwich will cause headaches for Williams defensively and could well be a good pick for first tryscorer at $23 with Sportsbet.

This game also presents a huge chance for Curtis Scott to produce a big performance against his former club following two good outings to start his career in the nation’s capital.

The battle of the props will go a long way to determining the winner. Josh Papalii played out of his skin in 2019 in both wins in Melbourne and you can bet Bellamy will have a plan to slow down the Samoan enforcer.

Best bet for Storm vs Raiders

Along with Roosters vs Rabbitohs, this clash is the pick of the games in round three and $2.25 feels good value for Canberra even with Bateman off the team sheet.