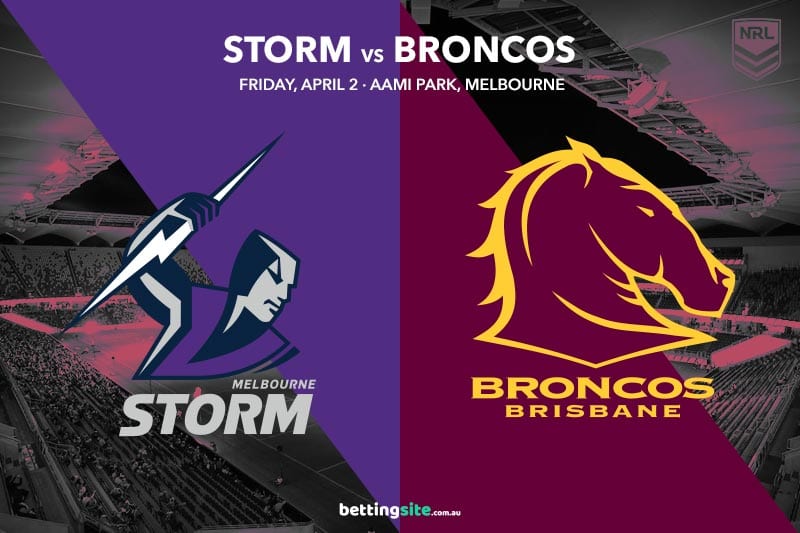 The Melbourne Storm will look to end a rare run of early-season outs when they host the Brisbane Broncos at AAMI Park this Friday night in round four of the 2021 NRL season.

It’s an extremely small portion of the campaign, but the Broncos are 10th and the Storm are 11th. Even with all the speed bumps that can be run into early in an NRL season, absolutely no one would have predicted the Broncos to be the higher-placed club coming into round four.

The Storm have won 18 of the last 20 games between these two clubs, and more often than not they’ve blown the Broncos off the park. Brisbane have concede more than 30 points in 11 of those losses, but they could be more competitive this week given Melbourne’s list of absentees.

The return of Payne Haas and Matt Lodge for the Brisbane Broncos mean they have more cattle up front to take on the might of Nelson Asofa-Solomona, Jesse Bromwich and Christian Welch. Brisbane will need an enormous effort from Haas first up off a long spell, but he is more than capable of producing an effort that can get the Broncos into the contest. A close game is reliant on Tevita Pangai Jr producing his best form too, but he has quietly put together a terrific fortnight of football after a horror 2020. Melbourne are still without Dale Finucane, who is perhaps their most important forward, so it feels like this is where it will be won and lost.

In recent weeks the Storm have struggled to score points, and it is hard to work out exactly why. They’ve played three of the best teams in the competition to start the season, but one feels they’ve missed Harry Grant while he continues to recover from a knee injury. Cameron Munster has been his usual energetic self and Jahrome Hughes a steady hand, but it is Grant who must be the straw that stirs the drink if this side is to succeed. They’ll look more like their old selves and should score more freely against Brisbane, but it won’t be a runaway scoreline. Importantly, they get Ryan Papenhuyzen back into the lineup, and we think he is a big chance to exploit the indecision of Tesi Niu and Xavier Coates down the left edge and score.

Xavier Coates… you know the drill. But outside of our guy, we think it is the night to take the +20.5 start. Melbourne haven’t been able to produce points at will, and now that Brisbane have snapped their losing streak and built a little bit of confidence, it just doesn’t quite feel like the runaway scoreline that many believe it will be. Herbie Farnworth is another sneaky option to include as an anytime scorer in your NRL multi bets following a fantastic performance of 269 run metres against Canterbury. He will match up well with the shaky right edge of Melbourne.

Melbourne will win the game, but we think Brisbane will take care of the +20.5 line. Strangely, they have been more competitive against the Storm in Melbourne than at Suncorp Stadium.

The Storm are blessed with attacking outlets, yet Justin Olam and Ryan Papenhuyzen with two tries each are the only Melbourne players to have crossed the line more than once this season. Nevertheless, we think Josh Addo-Carr will notch the first on Friday night as the hosts look to stamp their authority on the game early.

We are taking Brisbane at the +20.5 line with a Xavier Coates try and Ryan Papenhuyzen to score at anytime. Bundle it up at Sportsbet for a $7.75 return.