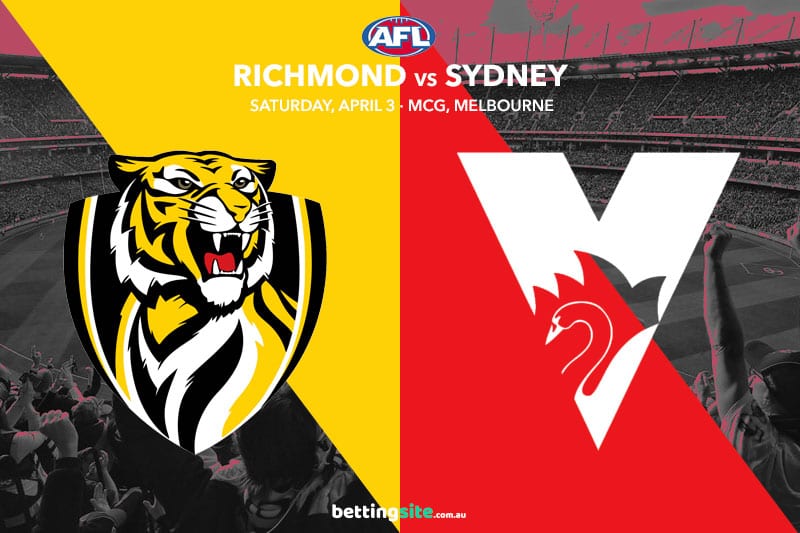 One of the most anticipated AFL matchups of the Easter long weekend sees Richmond host the Sydney Swans at the MCG on Saturday afternoon.

Who would have thought at the start of the year when the premiers from the last two years took on the young Swans in Round 3 it would have everyone waiting with bated breath? The last time these two met it was a boring defensive game, but we expect this to be one of the more entertaining games of the year to date. Both teams are 2-0 heading into Saturday afternoon, and despite the disparity in the AFL betting markets, this looks set to be one of the must-watch games of the weekend.

Richmond look set to be boosted by the return of premiership duo Bachar Houli and Nick Vlaustin to a defence that looked shaky at times in the first fortnight of the season. The Tigers were workmanlike against Carlton in Round 1 and then Hawthorn in Round 2, but in certain phases of those games they showed why they are still the benchmark of the competition.

Sydney welcomed back the great Lance Franklin last week in their win against the Crows at the SCG, and they could regain young midfielder James Rowbottom from an injury he picked up in the Round 1 win against the Lions. The Swans may lack a touch of class around the ground compared to Richmond, but they will certainly not go down without a fight.

Many would say Dustin Martin is the best player in the competition by some margin. But the modern footy landscape is ever-changing, and Isaac Heeney is one of the rising stars who could take that title off the Richmond great in the next few years. We may not necessarily see the two guns go head-to-head in the midfield very often, but their respective output could decide the game. Both players are able to pick up 20+ touches and kick multiple goals on a regular basis; Dusty has done it for much longer, but Heeney has started the season in red-hot form. Online bookmakers are paying $4 for Martin and $4.20 for Heeney to kick three or more goals on Saturday afternoon, and with plenty of key forwards for both defences to take care of, perhaps it’ll be Dusty or Isaac who steals the limelight once again.

The Richmond squad is stacked with star players: Dustin Martin, Trent Cotchin, Jack Riewoldt, Tom Lynch and Dion Prestia, to name a few. But one who continues to go under the radar is Kane Lambert. Having started the year with 28 touches against the Blues and then 24 against the Hawks, he has kicked off 2021 where he left off in 2020. We think he is a big chance to grab 30 touches ($3) against the Swans and sneak forward at some stage to snare a goal ($1.57).

The Swans have been electric to start the season. No one expected them to beat the Lions as they did in Round 1, and for them to back it up against the Crows last week suggests they are a team Richmond cannot afford to take lightly. Logan McDonald, who was taken with pick no.4 in last year’s draft, has started his AFL career in fine fashion, but Richmond’s back six are a different beast to anything he has ever come up against. We are backing him to handle the occasion with the maturity of a player who has played more than just the two games. The $2.60 at Sportsbet for McDonald to kick two or more goals is a price we are finding hard to ignore.

Richmond have been impressive at stages to begin 2021, but the Swans have arguably looked more consistent than the reigning premiers. The four-goal start on offer for the Swans on Saturday seems about right, as Richmond tend to really hit their straps as the year goes on. Sydney have a clean bill of health heading into Round 3, and who knows what John Longmire has in store for Damien Hardwick and the Tigers?

Luke Parker has long been a staple of the Swans midfield, but early in this season he has been getting forward more often and hitting the scoreboard with great effect. In Round 1 he kicked two goals against the Lions, and he managed to kick another last week against the Crows. With Sydney needing a few points of difference against the Tigers, perhaps Parker is one of those up forward.

Despite how great Sydney have been, Richmond are still the benchmark of the AFL and should be 3-0 after the weekend. Expect Logan McDonald to relish being on the MCG for the first time, while Dustin Martin and Kane Lambert should do the damage for the Tigers.