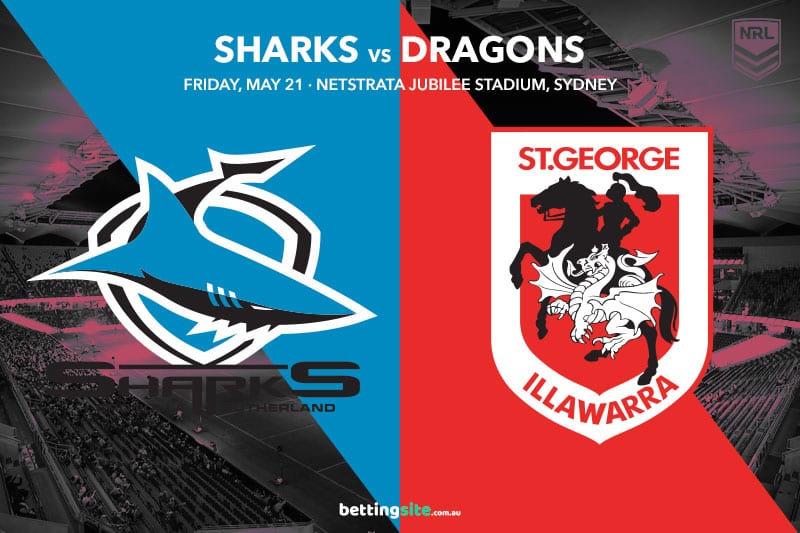 In one of the stranger NRL betting markets of the year so far, the Cronulla-Sutherland Sharks will start as favourites when they collide with St George Illawarra at Kogarah on Friday night. Cronulla have lost six in a row and were paying well over $2 with bookmakers on Monday, but once the news dropped of the Dragons’ judiciary sheet and injury list, the market did a full 180.

Tyrell Fuimaono, Mikaele Ravalawa, Tariq Sims and Josh McGuire are facing up to a combined 10 weeks on the sidelines due to suspension, which is going to test the depth of the Dragons. They are already without star centre Zac Lomax and could also be missing Matt Dufty with a shoulder injury, which may leave them to call back the likes of Rod Wishart and Mick Potter for a game.

If Cronulla want to get anything out of a season they are effectively tanking, a second win over their local rivals will at least send the fans home happy.

With the amount of injuries and suspensions the Dragons have been hit with, you’d have to think the Sharks can’t slump to a seventh loss in a row. If you were able to get the big head-to-head price for Cronulla before the market swung around, a tip of the cap to you.

In the tryscoring stakes, William Kennedy has been one positive for the Cronulla Sharks this year and is always a decent chance to cross, but can he make it back-to-back weeks with a try? Briton Nikora was the bread-winner for us last week, but we reckon the cult hero Toby Rudolph is overdue to crash over in a game where the Dragons are missing plenty of good players.

The 1-12 market looks the best way to go with the Sharks. If they win, they’ll just about fall across the line.

Just who turns out for the St George Illawarra Dragons on Friday night is anyone’s guess, as they’ve got more holes to fill than a broken-down Bobcat. They were brave against the Storm when reduced to 12 men but fell away after the break. A Dragons/Sharks half-time/full-time bet at $7.50 might be worth investigating this week, as it just feels like St George Illawarra will run out of steam.

With none of Matt Dufty, Zac Lomax or Mikaele Ravalawa to choose from, Cody Ramsey is the easy pick in the tryscorer markets for the Dragons. Ben Hunt should give punters a nice price to cross over at some stage, while the hard-running Josh Kerr also looks good value on the back of a strong display against the Storm.

Scanning through the two team lists, Ben Hunt’s name jumps right off the page. He is a better player than Chad Townsend, but both will believe they can steer their side to an all-important derby win this weekend. Hunt’s big price tag and having the captaincy next to his name means the result falls on his shoulders almost every game, but none more than this week when you look at the troops missing in action. Townsend will be playing in his final derby game between these two great clubs, and if he can keep Cronulla level-headed, it might be enough for him to go out on a winning note.

The Sharks should get the win, but it won’t be impressive viewing. Cronulla at the 1-12 margin will be the winner on the day.

Sharks 1-12 with Cody Ramsey and Connor Tracey to both score a try pays $13.50 at Sportsbet.