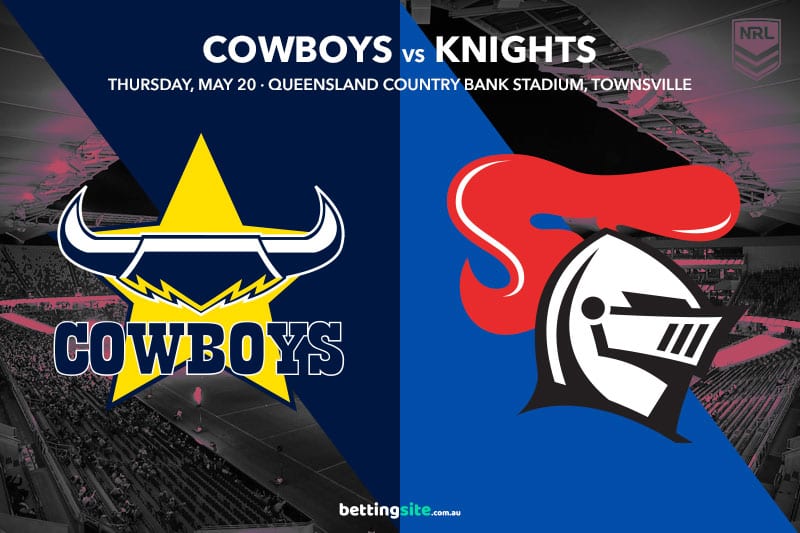 The Newcastle Knights remained in Queensland after their NRL Magic Round capitulation and will head to Townsville to take on the North Queensland Cowboys on Thursday Night Football. Another shocking loss from the Knights has led to a review of their football operations, and who knows whether that causes the team to walk on eggshells or inspires them to start putting in?

The Cowboys come in as the favourites at $1.60 and have won four of their last six games, with their most recent loss against the Roosters leaving many feeling good about their improvement for the remainder of the season. Given the Knights’ horrible record in Queensland over recent seasons, the Cowboys have to look at this game as a gift two points to keep their finals hopes alive.

Get in early while you can get on the -5.5 line for the Cowboys; it’s the quickest way to boost your value, and they will cover the line comfortably. Valentine Holmes is improving at fullback and had some sensational touches against the Roosters, so be sure to include him in the anytime tryscorer markets. Scott Drinkwater is fresh off a double and was very honest about how he thought one bad decision cost his team any chance of pulling off the upset last week, so he will be in a mood to atone for that and will offer good value again to score a try. The 13+ margin could also be in play for the home side, and we think it’s worth going that way rather than 1-12.

A Knights team with no Mitchell Pearce or Kalyn Ponga doesn’t stand much of a chance on the road. There is a clear lack of direction and their enthusiasm is just nowhere near as high with these two missing, so it’s probably safest to avoid taking them at the skinny +5.5 line. With a spine that lacks cohesion, predicting where the points will come is a tough ask, but whoever lines up at left wing – most likely Brayden Musgrove – might be the best chance. Tyson Frizell is the value option in the forward pack; he will be running all night at Scott Drinkwater, who might be the worst defensive half in the competition, so he is going to get his fair share of chances.

Jake Clifford will join the Newcastle Knights in 2022, and this weekend he will match up against the man he is likely to replace in Phoenix Crossland. Clifford has put two good performances together since he was recalled by Todd Payten, with his short kicking game a particular strength. Crossland has shown a few glimpses of strong running in recent weeks, but both he and Clifford fall into the habit of deferring to their halves partner too often. Clifford showed against the Broncos that he is capable of taking on more responsibility, but can Crossland come to the party?

The Cowboys should take another step forward and beat the Knights by the 13+ margin. Newcastle’s bad record in Queensland over the past five seasons is impossible to ignore.

The Cowboys at the line with Valentine Holmes, Jake Clifford and Brayden Musgrove to all score a try at any time can get you a very nice $34.50 return at Sportsbet.