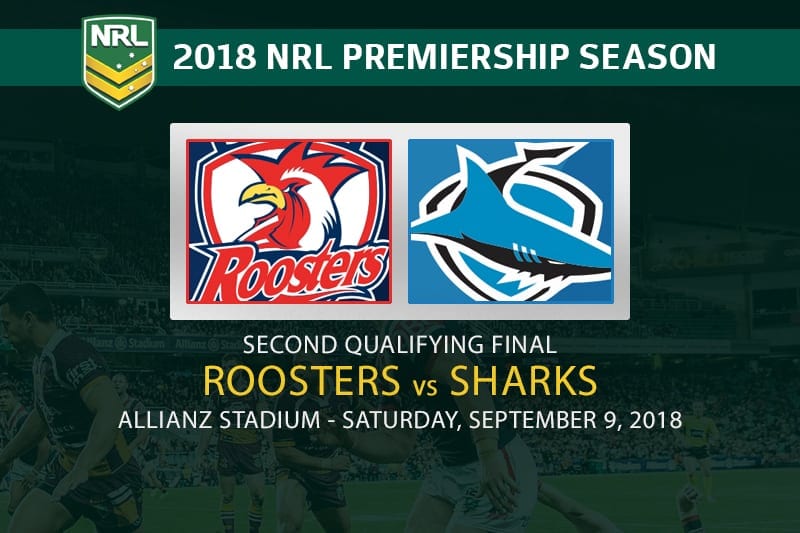 Kick off at Allianz Stadium from 7.40pm

It is an all-Sydney qualifying final on Saturday night as the minor premier Roosters host the Cronulla Sharks.

The Tricolours secured the top spot on the ladder after crushing the Eels in the final round of the season. The Chooks had it all to play for after the Storm were upset on Friday night, and they duly delivered.

The Sharks did what they had to do against a dangerous Canterbury Bulldogs side that caused headaches for final aspirants in the final month.

The win locked away a top four spot for the Sharks, who now have a legitimate crack at the NRL premiership.

This final could produce the Grand Final winner, so let’s have an in-depth look at the two sides taking to the field this Saturday night.

Finals footy is why Teddy came to the Roosters and he finally gets a chance to strut his stuff in September. The dynamic fullback has been a scoring threat throughout 2018 so keep an eye out for him to cross the try line at some point on Saturday night.

It’s time for the dynamic Dugan to step up and prove his worth. The man was accused by his teammates – albeit in a jocular fashion – that Dugan jumped ship to Cronulla for the cash, while the former Raider said it was to ‘play finals footy’. Here’s your chance to prove it Josh.

Roosters vs Sharks – Who wins?

We can’t wait for this one.

The Sydney Roosters took awhile to get going this season but they seem to have it all together. On paper they have the best team in the NRL, but in practice it doesn’t always work out that way.

The Sharks are a mercurial team that have some of the most attacking players in the league. Valentine Holmes and Josh Dugan are line breakers that possess try scoring prowess.

The Roosters will be backing their dependable defense to again deliver a stoic display, while Cronk’s second week back in the Tricolours will help boost their playmaking abilities.