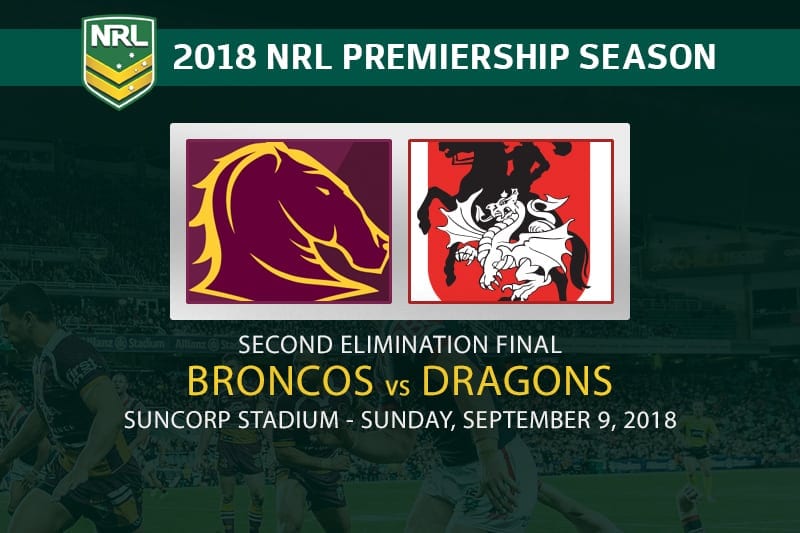 Kick off at Suncorp Stadium from 4pm

The easiest to predict final is left until last as the Brisbane Broncos host the flailing St George Dragons on Sunday.

It’s hard to hold any confidence for what this finals series will hold for the Dragons dispute their last round success against the Knights. Before that game the Dragons failed to score against the lowly Bulldogs and were humbled by the Parramatta Eels 40-4.

It’s not uncommon for a Brisbane team to be peaking at this time of the year under Wayne Bennett and this year’s iteration is no exception.

The Broncos are unquestionably the most in-form team in the competition. The sixth placed side hammered two top-four sides along the way to record three-straight games leading into the finals.

On form this looks like a walkover, but finals footy is never that simple.

No other player in the competition brings in the type of form that Corey Oates has displayed in the last round. The Queensland representative crossed the try line four times for the Broncos against the Sea Eagles, equaling a club record for tries scored in a match. Wayne Bennett has his man peaking at the right time.

The captain returns to provide some much needed leadership for the Dragons. St George rushed the Englishman back following a shoulder dislocation three weeks ago, but the 29-year-old is confident he is fit and ready to fire. Time will tell, but one thing is certain: the Broncos will be coming for him.

Broncos vs Dragons – Who wins?

On paper the Broncos look extremely hard to beat.

The home side comes into this match chasing a fourth-straight success in a run that has included strong wins over the Sydney Roosters and South Sydney.

The Dragons have been in free fall coming into the finals and we’re ignoring the win against the Knights. The 38-0 loss to the Bulldogs a fortnight ago was as bad a loss as any team has recorded this year and we have no confidence that they can turn things around in September.

The Brisbane Broncos are the safest bet in across all footy codes in the opening week of the finals.