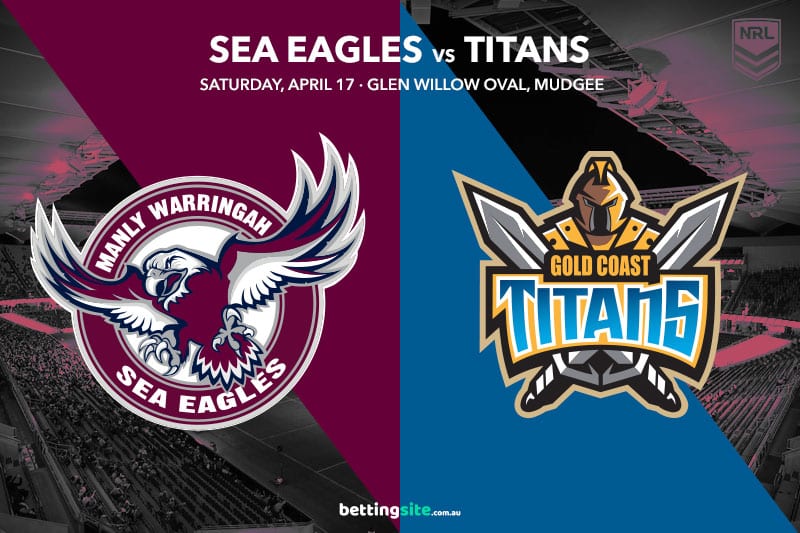 The Manly-Warringah Sea Eagles will clash with the Gold Coast Titans at Glen Willow Oval on Saturday afternoon, with the Queensland-based team the raging favourite with NRL bookmakers.

Mudgee will host its first game of top-flight NRL action since 2019, with the Sea Eagles opting to return to their adopted home in round six this year.

The Titans are fresh off an emphatic win over the Knights and will enjoy returning to the 3pm time slot, where they have a great chance to secure their first away win of the season as the $1.48 favourite.

The Sea Eagles will be buoyed by the return of their superstar fullback Tom Trbojevic and can make it two wins in a row, while the Titans will almost certainly be without their State of Origin winger Phillip Sami, who will need to pass concussion protocols to take his place in the side.

The Titans have had plenty of success in recent seasons against Manly, winning five of the previous seven head-to-head clashes.

If Manly fans aren’t parting with their cash and backing Tom Trbojevic to score a try, re-evaluate your fandom. Sure, he might be short on match fitness, but such is his class that he only needs the smallest of chances to make the opposition pay. He is $2.25 with Australian bookmakers to score any time, and it could be the only week where you get those kinds of odds, so get on. Josh Schuster at $4.50 is a sneaky value bet to cross the line, and if you believe Manly get the two points, the 1-12 margin at $4 is the way to go.

The Titans have broken the 40-point barrier twice in a season for the first time in their history, and it’s only round six. Manly have conceded that figure twice already, which plays a big part in the $2.75 on for the Titans to win by 13+ points, and punters should naturally gravitate towards that. Manly have conceded tries out wide like it’s going out of fashion, so look for Corey Thompson at $9.50 to be the first try scorer. The form of David Fifita has been frightening on the left edge, and Manly’s last game against a devastating edge forward in Viliame Kikau resulted in him scoring a double, so getting Fifita in your betting slips is a must.

Tom Trbojevic to score a try

Jarrod Wallace as a prop set up three tries for the Titans last weekend and picked up three Dally M points for his troubles, but can he produce that same style of performance against Martin Taupau? Wallace was more than happy to pass, doing so on half of his 19 receipts and it caught the Knights napping, so can Taupau turn creator for the Sea Eagles? Admittedly, the way Taupau does it is with late offloads and power running, which makes for a terrific yet contrasting battle up front.

The Sea Eagles will improve with Tom Trbojevic back in the side, but it won’t be enough to get the points. The Titans by 13+ is how this game ends, as two of the last three games between the two clubs have finished this way. David Fifita will star once again, but Brian Kelly against his former club could also have a day out.

The Titans at the line with Corey Thompson and AJ Brimson both to score can get you $10.38 at Sportsbet.