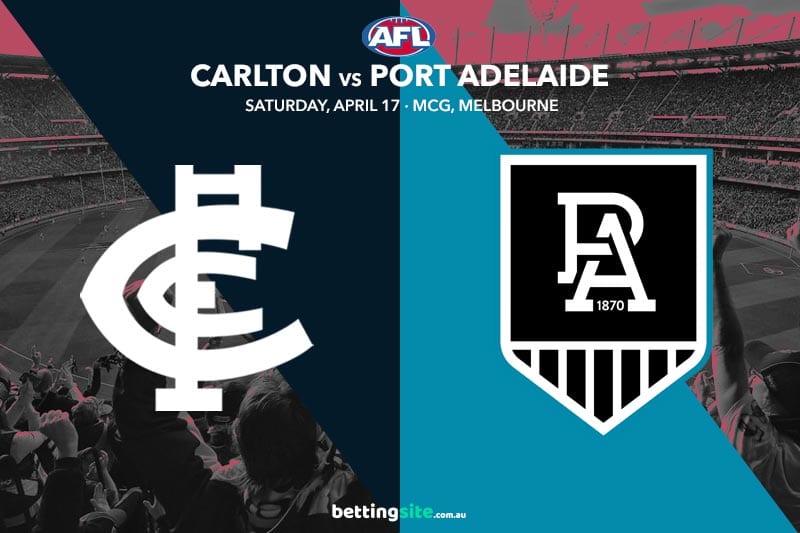 Can the Carlton Blues get their third consecutive win of the 2021 AFL Premiership season when they host Port Adelaide at the MCG this Saturday night?

Both teams are coming off victories in round four. The Blues outmatched the Suns on the Gold Coast, while the Power were strong enough to outlast the Tigers at the Adelaide Oval.

The Power lost Xavier Duursma (knee) and Zak Butters (ankle) in the win over Richmond, while a handful of other players soldiered on through corked legs and general soreness.

The Power have won the last four clashes against the Blues, who will be eager to flip the script after going down to an after-the-siren goal from Robbie Gray last year.

Jack Silvagni will miss this match with his second shoulder injury of the season, but strong aerialist Mitch McGovern is finally ready to take his spot in the forward-line this week. Zac Williams should also be fit for the Blues, bringing much-needed speed to their midfield group.

Ken Hinkley is spoilt for choice when it comes to replacing his injured stars this week, as the Power have plenty of depth beyond their best 22. Todd Marshall should make his return after missing last week as a late change, giving Port another avenue to goal this Saturday night.

Although Patrick Cripps and Travis Boak will not play directly on each other, they will both be critical to their respective teams’ chances of success this Saturday.

Cripps leads from the front, bringing his teammates into the game and getting plenty of his own footy. The Carlton skipper averages over 30 disposals in his last four matches against the Power, and online bookmakers are paying a juicy $3 for him to hit that mark again this week.

Boak appears to be aging like a fine wine, putting together yet another brilliant season as Port Adelaide’s best midfielder. Not only is the former Port captain racking up the disposals, he also looks lively in the forward half. Boak could spend more time ahead of the footy in the absence of Zak Butters.

Saturday night footy under the lights at the MCG is the perfect situation for Robbie Gray. Although he has not been at his prolific best in front of the big sticks in 2021, the Port Adelaide veteran is still finding and providing plenty of scoring opportunities. Gray should take control inside 50 while Butters is sidelined and slot any chances he gets.

A small hiccup against the Eagles back in round three has been the only blemish of Port Adelaide’s season thus far. The Power should have their flair and confidence back following their gutsy win over the Tigers last Friday, and we are backing them cover the points spread this weekend.

Unfortunately for Carlton fans, we see the Power getting a big win at the MCG. Even though David Teague has the Blues playing good football, they are not on the same level as the top premiership contenders just yet. We like Patrick Cripps to pick up 30 or more touches as Carlton suffers its fifth straight loss to Port Adelaide, with Robbie Gray snagging a couple of goals.