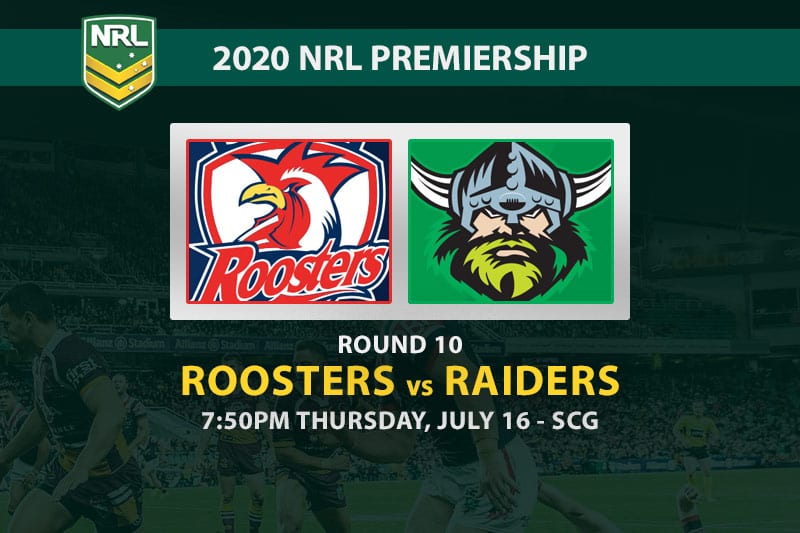 Due to a series of injuries on both sides, the NRL Grand Final rematch lacks some star power. However, that shouldn’t detract from what should be a fascinating contest overall.

The Sydney Roosters finally get to walk out onto the SCG, where they haven’t played since last year’s preliminary final win over Melbourne. For the visitors, that spells danger.

The Tricolours only lost one game in 2019 at the venue, and that was a round one clash with South Sydney. After that loss they racked up 30 or more points in seven games, showing how well they know the famous old ground and all its quirks.

The Canberra Raiders will be missing Josh Hodgson for the remainder of the season as well as Bailey Simonsson, which sees them head into Thursday’s clash as $4 rank outsiders.

The red-hot form of the Roosters also contributes to this somewhat, but considering their three games last year were all decided by six points or less, that price is a little surprising.

Because of how recent clashes between these sides have gone, it might be time to make your own line. The current line is 10.5, which comes on the strength of Sydney’s record at the SCG.

It will be interesting to see if the injury to Simonsson will allow Curtis Scott to come back into the mix somewhere or if Jordan Rapana will slot straight onto the left wing.

Ricky Stuart often holds his cards close in that regard, so hold off if you’re looking at any of these players in the tryscoring markets.

If it’s wet, as expected, it could well be the night to take the unders in a Roosters game. NRL betting sites are paying around $2.40 for a Sydney win and under 38.5 points, which is a good price, or $2.30 if you think it will go overs.

Best bets for Roosters vs Raiders