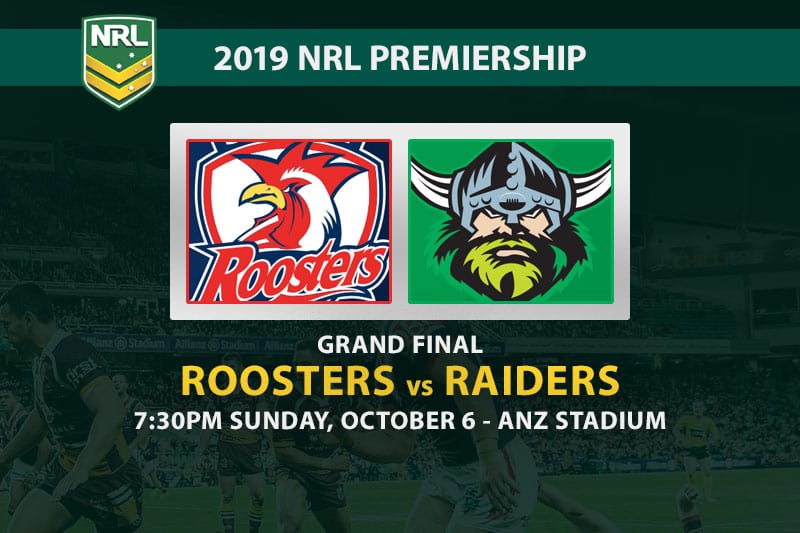 After 25 rounds of home-and-away games and three weeks of finals, only two teams remain in the race for the 2019 NRL Premiership.

The Sydney Roosters are aiming for their second consecutive flag and will start Sunday’s NRL Grand Final as heavy favourites.

The Chooks won seven of their last eight games leading into the playoffs, where they beat two fierce rivals in the South Sydney Rabbitohs and the Melbourne Storm to keep their title defence alive.

Their final challenge is a Canberra Raiders outfit that also beat the Storm and the Bunnies to reach the big dance, albeit in reverse order.

The Raiders have won many admirers over the course of the campaign and showed their premiership credentials when they beat Melbourne at AAMI Park twice in the space of five weeks.

This is Canberra’s maiden trip to the NRL Grand Final and their first title fight since 1994, when the Green Machine won it with a team that included Laurie Daley, Mal Meninga and current coach Ricky Stuart.

Jared Waerea-Hargreaves is back from a one-game ban, which pushes Siosiua Taukeiaho to the bench and Lindsay Collins to the reserves. Sam Verrills stays on at hooker, meaning Roosters co-captain Jake Friend is listed in the emergencies.

Out: Lindsay Collins
In: Jared Waerea-Hargreaves

There was a ripple of concern around the Canberra camp when Josh Hodgson sat out training on Tuesday with a virus, but the hooker is named to start in an unchanged team. Siliva Havili, Sebastian Kris, Ryan Sutton and Sam Williams are on standby.

Latrell Mitchell – The Roosters are flush with attacking outlets, but Mitchell is the pick when it comes to putting scores on the board. Sportsbet’s $9 first tryscorer odds are worth a punt.

Jarrod Croker – The Canberra captain is always a threat in big games, as he showed when he notched the first against the Bunnies last week. The $4 at Sportsbet for anytime tryscorer is good money.

James Tedesco – Who else? Sydney’s superstar fullback has already collected a stack of honours this year and would love to cap it with a premiership medallion and the Clive. Get around him at $5 with Ladbrokes.

John Bateman – The Raiders have had several stars this year, but Bateman has been the best of the lot. The English second-rower loves a tight contest and offers decent value for BOG at $21 with Sportsbet.

Roosters vs Raiders stats and trends

This Sydney Roosters team is special. Two years in a row they have conquered Melbourne when it mattered, which is about as good as it gets. The Raiders have also turned up in the big games and taken some notable scalps, but do they have the scoring power to match the Tricolours if the game opens up? Canberra will keep it as tight as possible, but this is Sydney’s flag to lose.