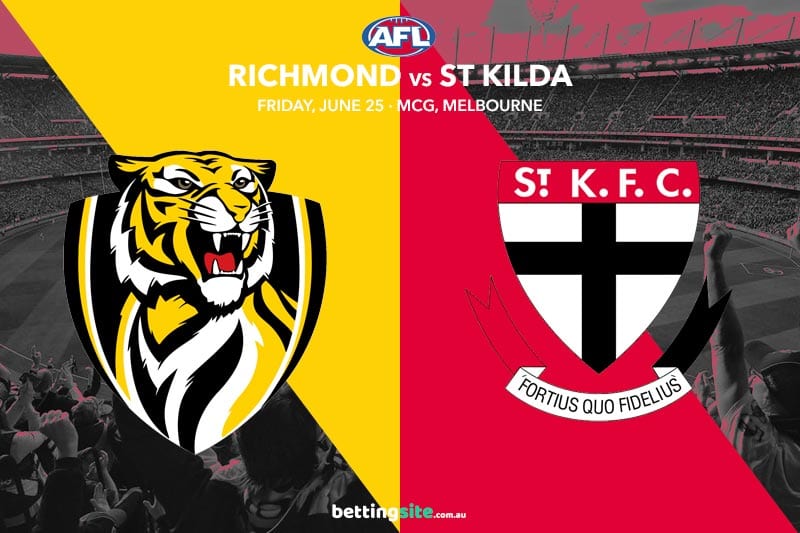 The St Kilda Saints have a chance to redeem themselves against the Richmond Tigers this Friday at the MCG in their second meeting of the 2021 AFL Premiership season.

The Tigers smashed the Saints by 86 points back in round five, which was Richmond’s biggest win of the season and St Kilda’s second-biggest loss.

With footy returning to Victoria this week as COVID restrictions ease further, up to 25,000 spectators will be allowed in for Friday night footy at the ‘G.

Plenty of changes are on the cards for both sides; Dion Prestia and David Astbury are pressing to play for Richmond, while Tim Membrey, Seb Ross and Rowan Marshall should return for the Saints.

Hunter Clark will likely miss the rest of the season for St Kilda after suffering a broken jaw against Adelaide, while Marlion Pickett and Daniel Rioli played in the VFL for the Tigers last week.

St Kilda’s two ex-Richmond forwards in Jack Higgins and Dan Butler have been hot-and-cold this season, but they both enjoy hitting the scoreboard against their old side. Higgins has been inaccurate in front of the goals since round eight, but we think he will kick straight coming out of the bye. Sportsbet.com.au is paying $2.60 for Higgins to kick two or more goals on Friday night.

What makes the Tigers a great side is their flexibility, as players such as Liam Baker can play in multiple positions. Baker has been fantastic this season for the reigning champs playing both across half-back and in the forward half of the ground. The Richmond no.7 racked up 20 disposals against the Saints back in round five.

These two star midfielders have been exceptional for their sides this year, with both placed inside the top 15 in the Brownlow Medal betting market.
Jack Steele tends not to play his best games against the Tigers, but he will need to be at his best for the Saints to have any chance of keeping up with Dustin Martin and co.

The three key inclusions of Rowan Marshall, Tim Membrey and Seb Ross will be crucial for the Saints, who we think will put up a better performance this time around. Toby Nankervis and Tom Lynch have demolished St Kilda in the last few clashes between these two sides, but they are both sidelined with knee injuries. We think the Saints will give the Tigers a run for their money this Friday night.

Liam Baker to get 20+ disposals

Liam Baker has played every game this season for the Tigers, averaging 21 touches per match. Baker has exceeded the 20-disposal mark in seven of his 13 outings this year, while he has just missed out in each of his last three. The Richmond utility had a great game against the Saints earlier in the year and should shine again.

We expect Brett Ratten’s men will play a much better game against the Tigers this week, with Jack Higgins hitting the scoreboard and Jack Steele leading by example in the middle. Liam Baker offers excellent value to get 20 or more touches.