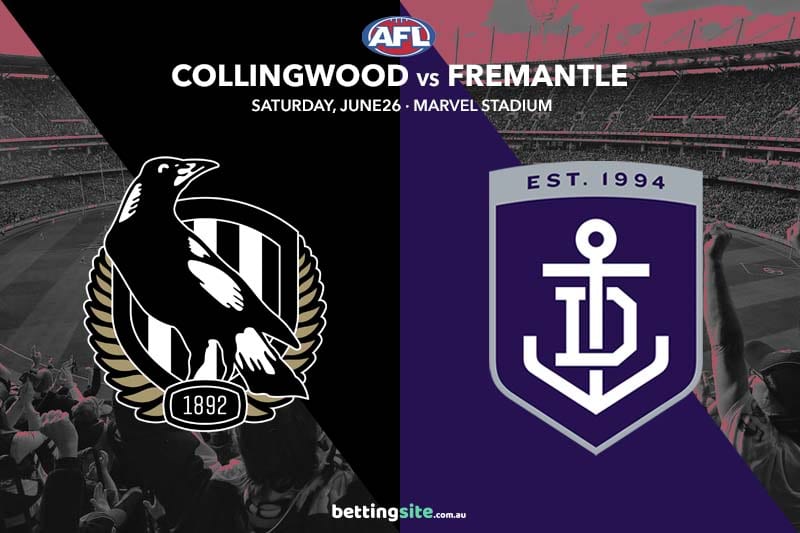 The post-Nathan Buckley era begins for Collingwood this Saturday when it hosts Fremantle at Marvel Stadium in round 15 of the AFL season.

Robert Harvey will see out 2021 as caretaker coach for the Pies, and his first assignment comes against his former fellow Collingwood assistant coach Justin Longmuir.

The Dockers will make the trip from Western Australia to Marvel Stadium with possibly a few crucial inclusions, as Nat Fyfe is pushing for selection alongside their key forward, Matt Taberner.

Nathan Wilson can return to the squad after serving his one-match suspension, while Griffin Logue and Sam Switkowski are also in the frame.

A handful of major changes will be made to the home side, as Jordan De Goey is ruled out through suspension and Darcy Moore is out for the season with a knee injury. The superstar duo of Brodie Grundy and Taylor Adams are likely inclusions into the Magpies’ side this weekend.

We are yet to see what style Robert Harvey decides to implement for the Magpies, but we know what to expect from Justin Longmuir. The Dockers normally prioritise defence, but they have not excelled in that area this season due to their extensive injury list. Fremantle currently rank 10th in the AFL for defence, conceding an average of 83-points per game in 2021.

This could be a great opportunity for the Pies to play a faster brand of footy, as the conditions will be perfect under the roof at Marvel Stadium. We think the talented smaller forwards will thrive against the Dockers, meaning the likes of Jamie Elliott and Beau McCreery will hit the scoreboard.

Two of the oldest and classiest players in the AFL will go head-to-head this Saturday when Scott Pendlebury and David Mundy meet at Marvel Stadium. Both players are aging like fine wine, especially the Collingwood captain who notched up 31-disposals against the Demons in round 13.

Both Mundy and Pendlebury provide good value to get 25 disposals this weekend, making them excellent options to include in any same-game multi. The Collingwood champion averages 30 disposals from his last three games against the Dockers and is in red-hot form.

Our best bets for the Magpies vs Dockers clash are:

Collingwood Magpies to win by 1-39

After beating the Adelaide Crows away from home and upsetting the Melbourne Demons in their Queen’s Birthday clash, the Pies have won two matches on the trot and have built plenty of momentum. We think the inclusions of Brodie Grundy and Taylor Adams will add enough firepower for the Magpies to secure the victory this Saturday.

The Pies picked up Beau McCreery with pick no.44 in the 2020 national draft and he has perfectly assimilated into the senior line-up. McCreery has laid 38 tackles and kicked 11 goals in his first eight matches, including three games with multiple majors. The small forward’s elite pressure should see him rewarded with another pair of goals against the Dockers.

We think this will be a very positive week for the Collingwood Magpies, whose transition into a new era will start off with a win over the Dockers. Even if Nat Fyfe returns from injury for Fremantle, we see Scott Pendlebury dominating the midfield. Beau McCreery adds the most value with his two goals, combining with the other two legs for a $8.50 return with Sportsbet.