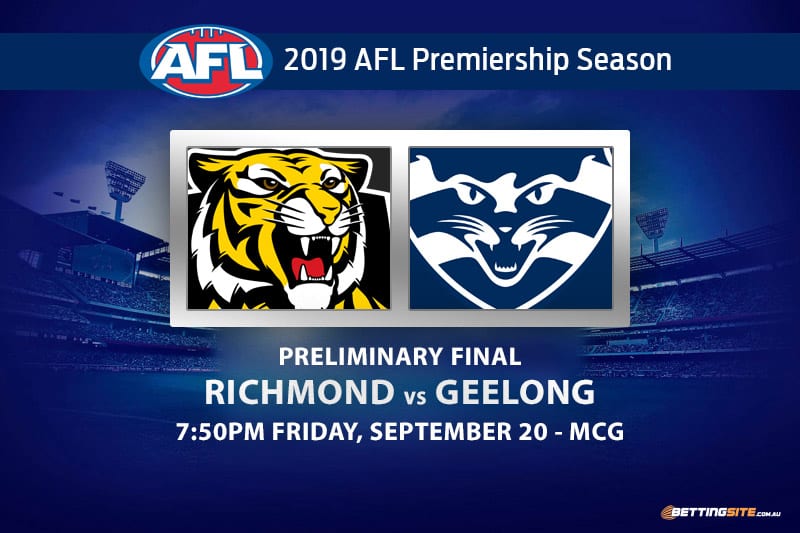 Richmond and Geelong will battle at the MCG on Friday night for a spot in the 2019 AFL Grand Final.

Both teams finished the home and away series with 16 wins, with Geelong placing first and Richmond third.

Chris Scott’s Cats have taken the long route towards the big dance after losing the qualifying final to Collingwood, forcing them to face West Coast in the semis.

Damien Hardwick’s Tigers tamed the Brisbane Lions in the first week of finals, providing them with a week’s break and the opportunity to study their opponent ahead of time.

Tom Hawkins was cited by the Match Review Office and offered a one-week penalty for striking West Coast’s Will Schofield, which will heavily impact the forward structure for Geelong.

Mitch Duncan has not recovered from a knee problem sustained in the loss to Collingwood, meaning he will also have to sit this match out.

The Tigers have steered clear of any injury issues during the first fortnight of the finals campaign, meaning they will be ready to go with the same team that beat the Lions.

Geelong smashed Richmond by 10 goals when they met earlier in the season, but the Tigers haven’t lost since their round-14 bye and the Cats haven’t won consecutive matches from that point on.

Dion Prestia to get over 29.5 disposals @ $1.95 with Sportsbet
If any player for the Tigers is going to get 30 disposals in the midfield, it’s Prestia. The former Gold Coast man has collected over 30 touches in six of his last seven games, with one 29-disposal match in between. Prestia has a good record against the Cats and will not have to worry about Duncan as an opponent.

Patrick Dangerfield to get 30 disposals @ $2 with Sportsbet
One player for the Cats needs to stand up with Duncan and Tomahawk out, and that man is Dangerfield. His last two matches against Richmond were disposal goldmines, with 39 and 38 respectively. The 2019 AFL Brownlow Medal favourite had four 30-disposal matches consecutively before the Eagles held him to 18 last week. Danger wears his heart on his sleeve and will not go down easy this week.

Jack Riewoldt to kick three goals @ $2.80 with Sportsbet
Even with Tom Lynch by his side, Riewoldt is the man who makes the Richmond forward-line tick. These two players both have the capacity to tear matches apart at any point, but Riewoldt looms as the more dangerous target this week. Having lost last year’s prelim to the Magpies, Jack will desperately want to impact early and get on the front foot.

Gary Ablett to kick two goals @ $2.80 with Sportsbet
With Hawkins out of the team this week and Gary Rohan struggling with injury, Geelong will need to find a different scoring avenue. Esava Ratugolea is a great target inside 50 but still drops plenty of marks, leaving ample opportunity for small forwards such as Ablett to rove and kick goals. The little champion needs a big week after two ordinary finals performances.

The weather is not going to be perfect in Melbourne this Friday night and both teams are going to focus on defence. Hawkins has played a part in one quarter of the Cats’ total scores in 2019, counting his goals and goal assists. This massive void cannot be filled in a prelim final.

The Tigers have the benefit of a week’s rest and the absence of two Geelong stars. Chris Scott would have to pull of a miracle for the Cats to win this week, but we do expect them to cover the line. Richmond will not risk any injuries in the last quarter if they lead.