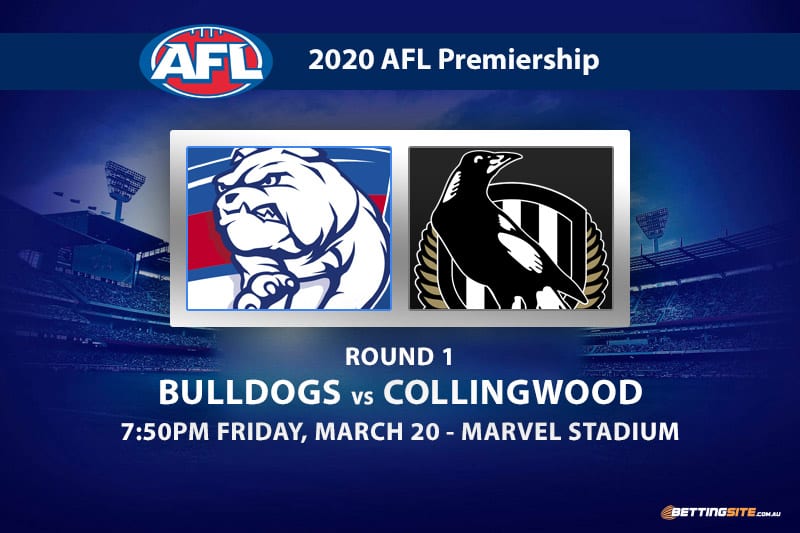 Friday night football makes a return to our television screens this week as the Western Bulldogs and Collingwood square up at Marvel Stadium in AFL Round 1.

Although there will be no crowd for this match, the energy will be through the roof as these teams are both tipped to be premiership contenders in 2020.

Collingwood Magpies coach Nathan Buckley has tried his best to prepare his side the same way he would in regular conditions, but the strange atmosphere will be hard to adapt to for one of Australia’s biggest sporting clubs.

We can expect plenty of action in the middle of the ground as the Western Bulldogs‘ triple midfield threat of Marcus Bontempelli, Jack Macrae and Josh Dunkley take on a star-studded Collingwood engine room led by Scott Pendlebury.

The Pies have a slight advantage over the Doggies in recent times, winning each of their last three clashes, although none of those games were blowouts.

Many footy pundits believe this will be the season where Marcus Bontempelli wins the Brownlow Medal. ‘The Bont’ is entering the prime years of his career and loves facing Collingwood. Having accumulated 66 touches in his last two outings against the Pies, Bontempelli is set to fire again.

‘Pendles’ continues to set the benchmark at Victoria Park and, despite a brief coronavirus scare, looks ready to go in Round 1. The Collingwood skipper’s second-highest disposal average is against the Bulldogs, making him a good choice to get 25 touches.

The newest Bulldog to enter the kennel will start in the forward line this Friday, and Josh Bruce looks like a threat that should not be underestimated. Even though Aaron Naughton has been cleared to play, Bruce is likely to stay closer to goal and looms as the primary scoring option inside 50.

After a rough 2019, Jaidyn Stephenson’s preseason was hampered by glandular fever and a slight hand issue. But when the first siren blows and ball is bounced, all those concerns will go out the window. Expect the 2018 AFL Rising Star to bounce back with a strong third season in the AFL.

You cannot be too sure about how well the teams will score this season with the quarters decreased to 16 minutes. The Magpies play a defence-first structure regardless, making the 142.5 a large total even without shortening the match time. The Doggies are still working out their forward structure at this point in the season.

The Magpies are the safer option at this point, but you can never be too sure what the Bulldogs will pull out on game day. Collingwood has won six of its last seven matches at Marvel Stadium, making it a very strong second home for the boys in black and white.