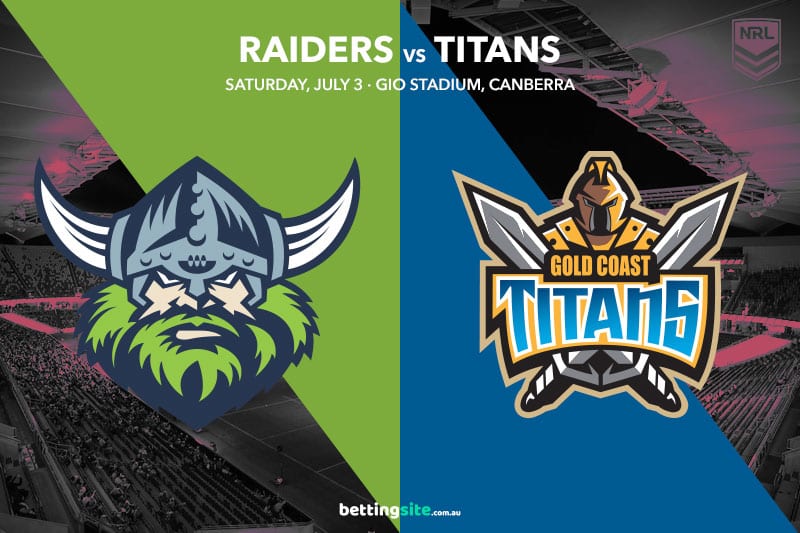 The Canberra Raiders and Gold Coast Titans are both running out of chances in the 2021 NRL season, and it will make their clash at GIO Stadium on Saturday evening must-watch television.

The Raiders have only secured two wins since Round 5, and they came against the teams running 15th and 16th on the ladder, while the Titans have conceded 30 or more points in five of their last six games. Both teams are having huge issues across the park and cannot hold onto half-time leads, so NRL fans won’t be able to look away from what could be one of the stranger games of the season.

Raiders skipper Jarrod Croker makes his long-awaited return after battling persistent shoulder and knee injuries, while the Titans will welcome back AJ Brimson after injuring his knee in Queensland’s 50-6 hammering in Origin I. Raiders winger Jordan Rapana will play his 150th NRL game against his former club, where he debuted all the way back in 2008 as an 18-year-old.

To have only defeated the Bulldogs and Broncos since Round 5 is almost impossible for a side with this much talent. Seven times in 2021 the Raiders have led by double digits only to be run down, so how on earth do you back a team who are having such a wretched season?

It sounds crazy, but wait until half-time and back whoever is behind. Canberra throw away leads like a negligent dog owner, so surely the inverse of that is to chase teams down when they fall behind. The other alternative is to take the Raiders to lead at half-time and fail to win at the tantalising price of $8.50. How could you not at this point?

The newly re-signed Semi Valemai is the $9 favourite to cross for the first try, but we love Ryan Sutton as the $4.33 roughie to score at any time. The Titans have been known for their soft goal-line defence, and the Englishman is a block of granite close to the line.

Much like Canberra, the Gold Coast Titans love to throw games away and have done so in spectacular style in recent weeks. Their form away from home this year has been abysmal for the most part, and it is hard to see how they turn it around and get the win.

The first place to look for some value is taking the over 51.5 total points at $1.90, with the Titans going over the line in seven of their last nine games. Brian Kelly is $3.10 to score at any time, and it should be snapped up, while Patrick Herbert at $26 is sensational value to score the first try of the match. Gold Coast will be looking to test out veteran Jarrod Croker, and Herbert is opposite the Canberra legend.

It isn’t the usual matchup you look for between these two clubs, but an interesting one is Ryan Sutton and Tyrone Peachey at the lock position. The two couldn’t be further apart in appearance and approach, but they both have big responsibilities for their team. Sutton has been Canberra’s most consistent forward in 2021, and his offloading brings Wighton into the game and creates holes around the middle. Peachey is at his best when he is roaming and looking to play with width. Styles make fights, and whoever plays the better on the night between these two will go a long way to getting their team an important win.

The only solid prediction here is this game will be a calamity. It will be a try-a-thon with the Raiders coming out on top and covering the -6.5 line comfortably.

Canberra at the line with Ryan Sutton, Brian Kelly and Semi Valemai to all score at any time gets you a handsome $34.50 return at Sportsbet.