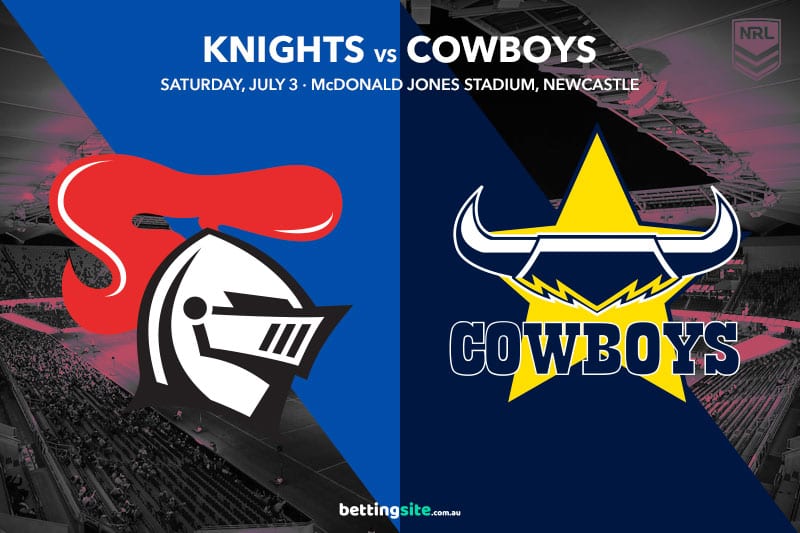 The Newcastle Knights will play host to the North Queensland Cowboys on Saturday evening at McDonald Jones Stadium in Round 16 of the 2021 NRL campaign, but it will be far from the usual trip south for the Cowboys. They will be without coach Todd Payten, who has entered 14 days of COVID isolation and will be replaced by assistant Dean Young for the all-important clash.

The bye came at the wrong time for the Cowboys, who conceded 50 points to Manly and then lost at home to the Sharks in what was a frustrating performance. A win for North Queensland would be just their second away from home this season, and it’d put a four-point gap between them and the Knights.

The home side will have Kalyn Ponga back from a groin injury, while Daniel Saifiti will also return after a terrific performance in Origin II. Jake Clifford was a Cowboy only five weeks ago, so his role in Newcastle’s preparation will be vital and you can expect him to produce another excellent performance with the boot. A win for the Knights would push them back to within striking distance of the top eight.

The big inclusion is Kalyn Ponga, who is set to finally take his place at fullback for just his sixth appearance of the season. He has four tries in five games so far this year, so the $1.91 for him to cross at any time should be snapped up quickly. Enari Tuala is another former Cowboy who is a good value selection in the anytime tryscorer market, paying $2.63 to score his third try of the season.

Newcastle did win at home in a close contest against the Warriors before the competition paused last week, and the rest may have come at the right time for them. They are edging closer to full strength and have had more time to ease Jake Clifford into their playmaking spine. They should cover the -4.5 line at $1.90, but it is too early to predict with any certainty if they can go on and win by 13 or more points, so stay conservative this week.

The North Queensland Cowboys have had training cancelled and lost their coach due to COVID-19 lockdowns, making it a less than stellar preparation for an NRL game. The Cowboys have only got one win away from home this year, and it came all the way back in April, so they needed a strong week on the paddock and have been robbed of that.

Hamiso Tabuai-Fidow looks to be a terrific option in the anytime tryscorer betting at $2.50 because of his big speed advantage over Kurt Mann. Scott Drinkwater at $4.33 is another good value pick because of his sensational running game. Newcastle have been vulnerable to halves who like to run the football, and Drinkwater will test their right edge out and Brodie Jones in particular.

Jake Clifford as released from the Cowboys early so they could accommodate Tom Dearden into their squad, so fans should be keen to see how both young playmakers perform on the night. Clifford has been impressive in his three appearances so far for the Knights, and his combination with Kalyn Ponga will be reignited from their days together in the North Queensland under-20s. Dearden has been starved of wins in his young career, losing his first two starts as a Cowboy and winning just four games in his first 24 as a professional. It’s rare in the NRL that fans can see immediately who got the better of a player trade, but this is one such example.

The Knights will get the win and cover the -4.5 line. The home team has won the last seven straight games between these two clubs, and the inclusion of Kalyn Ponga against his former club is a big factor.

The Knights at the line with Hamiso Tabuai-Fidow and Kalyn Ponga both to score a try gives us a handy $9 return at Sportsbet.