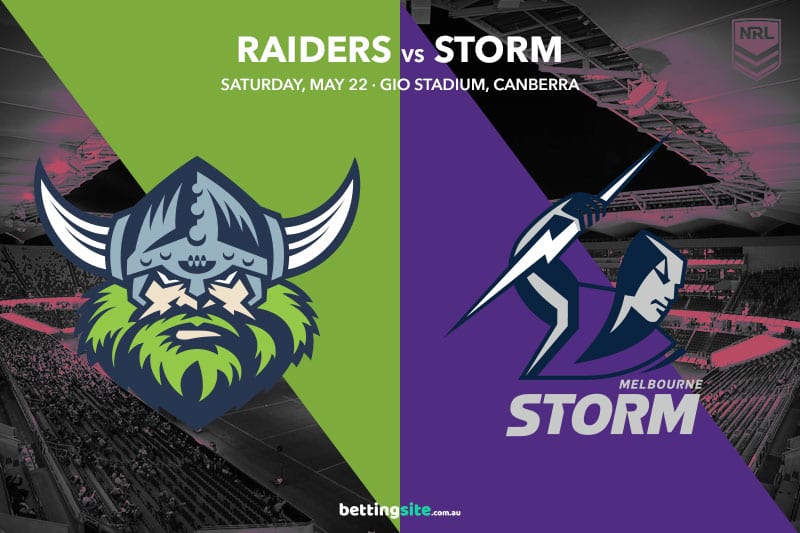 The Canberra Raiders ended their five-game losing streak with a gritty win in Magic Round, but the gloss of that performance will soon wear away when the Melbourne Storm head to GIO Stadium on Saturday night in Round 11 of the 2021 NRL Premiership. The Raiders have had success in recent years against the Storm, but with Josh Papalii, Jack Wighton and Josh Hodgson set to miss the game, Melbourne come into the contest as almost unbackable favourites. Ryan Papenhuyzen, Cameron Munster and Harry Grant will be missing for the Storm, but the form of Nicho Hynes will have Melbourne fans sleeping easily throughout the week.

Without Jack Wighton in the spine for the Canberra Raiders, their left-edge attack is going to completely change. Sam Williams is a 10-year veteran who knows exactly what is required, but is he able to engineer any points against an awesome defensive unit?

The +16.5 line might be one to take on despite Canberra not covering in their past six games. A renewed sense of confidence against a side they’ve played well against in recent seasons feels like the recipe for turning around that stat.

Some of the prices for the Raiders in the tryscorer markets are exceptionally long, but Sebastian Kris at $4 on the left edge might be worth investing in. Hudson Young at $8.50 is a long shot, but he is due to return to that early-season form and could deliver punters and enormous shot in the arm.

Any time you can turn up to play away from home and you’re $1.12 to get the win, you’re doing a lot of good stuff. The 13+ margin for Melbourne is the popular choice, but it doesn’t offer much value at $1.50 and change with most online bookmakers. If you believe the Raiders will make this somewhat tough for the Storm, the 1-12 margin at $3.75 is terrific value.

Josh Addo-Carr has 12 tries in his last three games, and his odds of scoring are getting ridiculous. The fact he is a shorter price to score the first try than the Raiders are to win a home game on the verge of winter is simply absurd. He is $6 to cross the stripe first and just $1.36 to cross at any time, and rest assured he will take the most money.

Harry Grant is a phenomenal footballer who would be missed by almost any team when he isn’t available to play, but with Brandon Smith also on the Melbourne Storm roster, it’s one of the biggest luxuries a team can have. Josh Hodgson’s injury last year unearthed a diminutive and tenacious hooker in Tom Starling, who is clearly the club’s no.1 option now. Starling is one of the smallest players going around, but he can be a handful around the ruck when the Canberra forwards start to offload. Smith’s presence is felt close to the line, where he has the strength to push through multiple defenders, but he is also capable of blowing teams apart on the back of offloads. For the purists, it could be one of the better clashes to watch of the weekend.

The Storm will win by 14 points, although the game will feel closer than the final score suggests. The $15 for that exact margin could end Super Saturday on an enormous high.

The Storm by exactly 14 points with Josh Addo-Carr to score the first try might be one of the best $111 pops of all time.