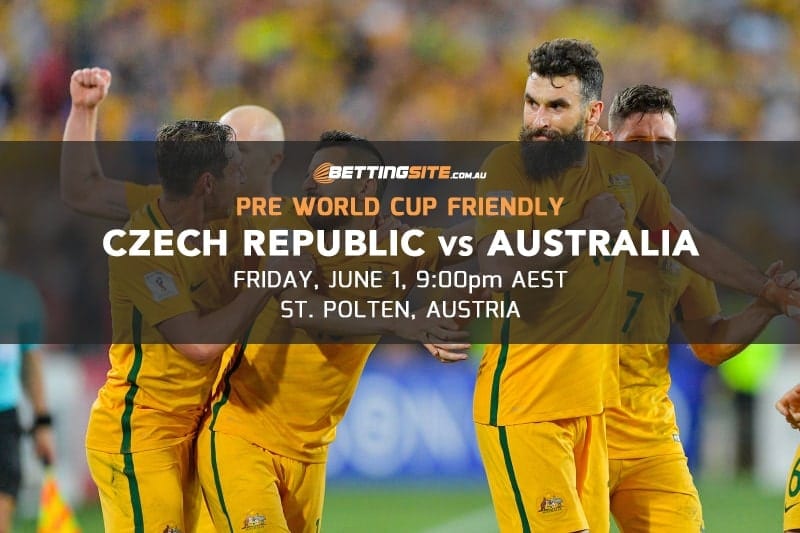 THE 2018 World Cup campaign kicks off this Friday for the Socceroos on Friday night as the Aussies face the Czech Republic in Austria.

It is a pivotal match for the Australians as coach Bert Van Marwijk prepares to cull three players from the 25-man squad heading into next week.

One player who will be looking to make an impression for the Socceroos is ex-Brisbane Roar striker Jamie Maclaren, who replaced Tomi Juric in the squad at the last minute.

The match represents a battle of pride for the Czech Republic, who failed to qualify for the 2018 World Cup.

While one team gears up for the World Cup in a fortnight’s time, the other will be watching the premier football tournament from the sidelines.

While they only sit five positions below their Friday night opponents in the FIFA world rankings, the Czechs finished third in their European qualifying group behind Germany and Northern Ireland.

The teams have only met one time prior, with the Czechs winning 3-1 on home soil all the the way back in March of 2000.

The 25-year-old has been a quality performer across his 13 appearances for the Czech Republic, scoring seven times. A proficient scorer at every level he plays at, the six foot striker has an uncanny knack of finding the back of the net, and without many tall defenders Krmencik should be able to take advantage of the Australians.

Michal Krmencik is the $5.50 favourite at Sportsbet to score the first goal on Friday night

Arguably Australia’s best attacking option coming into the World Cup, a lot of the Socceroo’s attacks will be formed through Rogic on the world stage. The prolific scoring midfielder was on-target for Celtic, as the Scottish clinched their seventh successive title. Given his goal scoring pedigree Rogic represents great odds.

Czech Republic vs Australia – Who Wins?

This is an extremely hard game to predict.

Away from home the Socceroos have been ordinary, failing to register a win outside Australia in 11-straight matches dating back to 2016.

The Czechs have nothing to play for other than pride, which makes for a difficult betting game. Will they come out looking to make a statement or will they see this as nothing more than treading water?

We’re backing the draw here. The Aussies showed true grit in their 0-0 draw against Columbia back in March, but their inability to find the back of the net on that night feels like it’s going to be a constant theme throughout this World Cup campaign.

The draw is at $3 via Sportsbet

South Korea continues its preparation for the World Cup with the first of three friendlies before its June 18 opener against Sweden.

The Reds take on Bosnia-Herzegovina in Jeonju on Friday, before clashing with Bolivia (June 8) and Senegal (June 12) with star man Son Heung-min expected to take part in some capacity in all three of the games.

The Reds are a $5 chance with Sportsbet to qualify from a tricky Group F which features Mexico, Sweden and tournament favourite Germany.

Also on Friday, France will take on an Italian team that would love to inflict a confidence hit on the French who are a $7 chance for the ultimate success in Russia.

The Italians, along with the USA, were the two biggest countries to miss qualification for the World Cup, so the underdog would love to show they should be there.

Les Bleus did what they had to do in a scrappy win over Ireland in their most recent build-up clash, and the likes of Olivier Giroud and Nabil Fekir will again be given chances to show why they deserve starting spots in Russia.

Other International friendlies taking place over the weekend include: