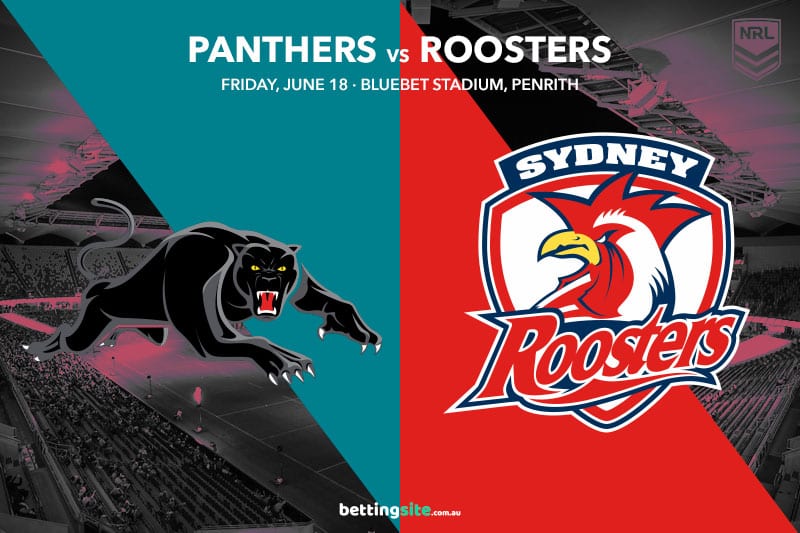 The game of Round 15 in the NRL will take place on Friday night at BlueBet Stadium when the Penrith Panthers host the Sydney Roosters.

The Roosters may be the big outsiders at the $4 price, but following the retirement of inspirational leader Boyd Cordner, is there an emotional factor at play that previously may not have been there?

Penrith are in the unfamiliar position of coming into a home game trying to avoid a third straight defeat, but there is familiarity in the 17 who will take the field. Viliame Kikau may be missing, but Nathan Cleary, Jarome Luai, Kurt Capewell and Brian To’o all make their return to the starting side.

Penrith won 27 regular games in a row before their squad was raided for the State of Origin series, so the short price indicates a feeling that business will return to normal come Friday evening.

Matt Burton scored a double in the loss to Cronulla last week, and in his time in the centres this year he has proven to be prolific. Stephen Crichton scored 15 in 2020 at left centre, and Burton in 2021 has nine in the same position, so there is a trend of that spot on the field being enormously important for Penrith. Burton is $10 at Sportsbet.com.au to score the first try, but the more likely outcome is $1.83 to score at any time.

Nathan Cleary scored a hat-trick in Penrith’s pulsating finals clash with Sydney in 2020, and there isn’t any suggestion he will repeat those efforts, but the $2.80 for him to score at any time has to be considered. He has five tries in his last three games for the Panthers, and his running game in Origin I indicated he is going to be hard to stop for opposition defences.

The -11.5 line on the Panthers at $1.90 looks to be the best way to go for this contest. At full strength, they’ve routinely covered the spread.

Just how the Roosters play only days after Boyd Cordner announced his retirement is hard to predict. One trend that is concerning for the Tricolours is their performances against top-four sides in 2021. Against Parramatta in tough circumstances they were brave but still lost by double digits. In Round 3 against Souths they were blown off the park, and had the Rabbitohs not completely switched off, the margin would have been much bigger than 10. Their trip to AAMI Park in Round 6 to play the Storm also ended in a 16-point defeat, so you start to see that against the top teams they are off the pace.

The +11.5 line would normally be too big for a side as well-drilled as the Roosters are, but the fully loaded Panthers are a different beast and will win by at least 12. Joseph Manu’s form in recent weeks has been sublime, so perhaps he could provide some value as a $21 roughie in the first tryscorer market. Failing that, the $3.75 for Manu to score at any time is impossible to ignore.

It was only five years ago Nathan Cleary was making his debut as an 18-year-old who promised plenty. Roosters halfback Sam Walker is now the up-and-coming star in the same position, so this master-versus-apprentice style of clash should be worth the price of admission and much more.

Walker has proven to be a sensation and kicked a match-winning field goal against the Titans in Round 14, while Cleary dominated different moments of Origin I and is widely considered the best halfback in the NRL. Cleary dominates in a methodical manner, and it can feel like death by 1000 cuts. Walker, on the other hand, plays a bit like the great Allan Langer and brings a level of unpredictability that is rare for a player his age.

BlueBet Stadium should be a sellout, and they’ll be treated to tremendous halfback play.

Penrith will win by 16 points exactly and show the rest of the NRL that when they’re at full strength, they’re almost impossible to stop.

Panthers -11.5 with Matt Burton, Daniel Tupou and Joseph Manu to all score a try pays $39.75 at Sportsbet.