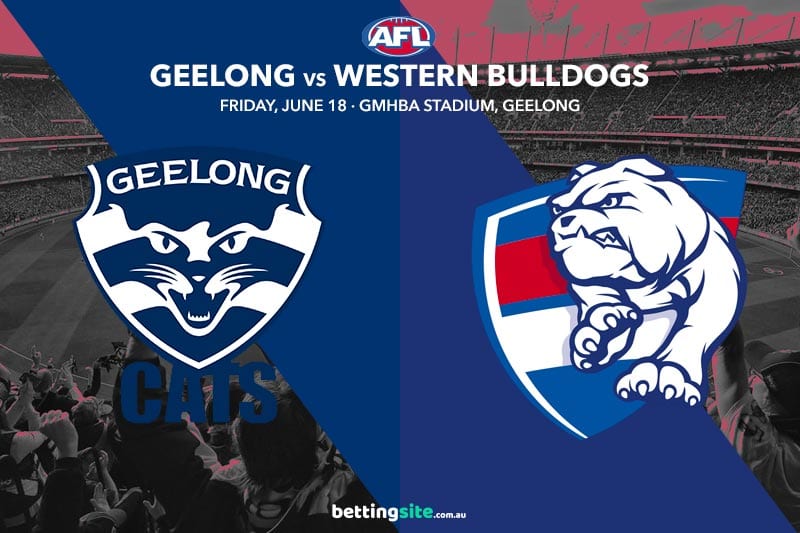 Two finals-bound teams will clash at GMHBA Stadium this Friday night when the Geelong Cats and Western Bulldogs face off in round 14 of the 2021 AFL Premiership season.

A crowd of 7,000 will be permitted to attend this match as COVID restrictions in Victoria continue to ease, but only local members will be allowed to purchase tickets.

The Bulldogs and the Cats sit second and third on the AFL ladder respectively, making this the obvious standout of the five games on the fixture this weekend.

Chris Scott’s Cats boast a very strong record at Kardinia Park, especially against the Bulldogs, who have lost nine straight games when travelling down the Princes Freeway.

Can the Cats extend their winning streak, or will the Doggies win and usurp the Demons on top of the ladder?

These two sides play a similar brand of football, as they both enjoy controlling the ball before advancing up the field. The Cats have utilised Tom Stewart and the hard-working Mitch Duncan to move the ball out of defence, while Caleb Daniel and Bailey Dale have been terrific in the back half for the Bulldogs. All four of these players provide great value in the disposal betting markets.

A majority of Geelong’s recent goals have been kicked by the dynamic trio of Jeremy Cameron, Tom Hawkins and Gary Rohan. The Bulldogs have a range of goalkickers every week, but the best value for this match comes from Cody Weightman at $3.30 with Sportsbet to kick two or more.

The key forwards have propelled both teams up the ladder this season, and we think Tom Hawkins and Aaron Naughton will be critical this week. Naughton has partnered Josh Bruce perfectly this season, but it is time for the young Bulldog to take control inside 50 and convert his chances. Hawkins could have kicked a bag last week, but the reigning Coleman Medallist finished with 4.4 against the Power. Having kicked 11 goals in his last four outings against the Doggies, the Geelong star could be set for another big haul this Friday night.

Geelong Cats to win by 1-39 points

Even though the Power started brilliantly last week and led at multiple stages, the Cats were strong enough to secure the victory on the road. Geelong has won nine straight matches against the Western Bulldogs at Kardinia Park and should get the job done this week. Cam Guthrie will make a timely return to tackle the talented Bulldogs midfield.

Cody Weightman has been a revelation for the Western Bulldogs this season, kicking eight goals from his four games. The buzzing small forward has a strong aerial presence but does his best work at ground-level. Weightman has kicked multiple goals three times this season while also peppering the behinds, so the $3.30 on offer looks well overs.

We are backing the Cats to win their sixth straight match of the 2021 AFL Premiership season. The goalkicking markets for this match offer great value, which is why are taking both Cody Weightman and Tom Hawkins to kick multiple majors. Combine these three legs for a $12.50 return with Sportsbet.com.au.