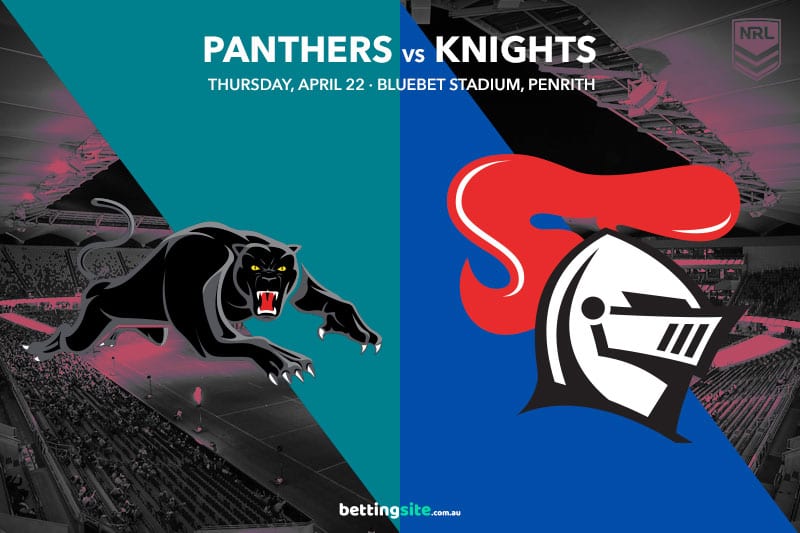 Round seven of the 2021 NRL Premiership kicks off on Thursday night at BlueBet Stadium, where the undefeated Penrith Panthers will play host to the Newcastle Knights. The Panthers are looking to extend their regular season winning streak to 22 wins, while the Knights are looking to pick up an unlikely two points to keep their season afloat before key personnel return.

Penrith come in as the hot favourite but were pushed to the limit by the unlikely Brisbane Broncos last week, which should give some hope to the Knights at the big $6.50 price with online bookmakers. The Panthers’ 11 straight wins at BlueBet Stadium make the task all the more daunting for Newcastle, but as round six proved, absolutely anything can happen in rugby league.

As is the usual routine for Panthers games, Charlie Staines and Brian To’o should both be backed to cross for the first try. Penrith could not cover the huge spread last week against the Broncos, and despite their awesome form at their home ground, the -16.5 line feels too big again. The Knights did get a draw against them in 2020, finishing as one of only three clubs to not lose to Penrith all year. Paul Momirovski should be thrown in as an anytime scorer also, as Newcastle have had some issues with their left-edge defence.

Any team with Kalyn Ponga in it shouldn’t be a $6.50 outsider with a +16.5 head start, but such is the dominance of Penrith in the last 18 months, those figures barely register a surprise. Despite having a double-figure injury list, there is enough talent in this Newcastle Knights side to ensure they hang on at the line. Their one issue under Adam O’Brien has been winning the games they’re expected to, whereas they have no issues getting up for the games as the underdog. Ponga should again be put in NRL multi bets as an anytime tryscorer option, while it might be a week to also include Bradman Best, who will be better for the run after returning from injury in round six.

James Fisher-Harris and Daniel Saifiti are impressive young bucks and have emerged as fantastic leaders for their respective sides, and this battle between two of the best props in the game is worth the price of admission alone. Fisher-Harris brings a physicality and dominance very few players in the game can, while Saifiti is a dynamic runner of the ball who can isolate players one-on-one before running over the top of them. Saifiti and David Klemmer as a combination have been great in 2021, but they’ll need to dominate Fisher-Harris and Moses Leota for the Knights to have any chance.

Penrith Panthers to win by 1-12 points

Penrith will win their 12th straight game at BlueBet Stadium, but they will do it by fewer than 12 points at the tasty price of $3.50. The combination of Jarome Luai and Nathan Cleary will have too many creative options for the Knights to handle.

Seeing as Penrith were tested by the Broncos last week, we are taking the Knights to hold them at the +16.5 line. Combine that with Brian To’o and Kalyn Ponga to score a try at any time for a $9.25 return at Sportsbet.

Who will definitely win this game papua New Guinean are confused