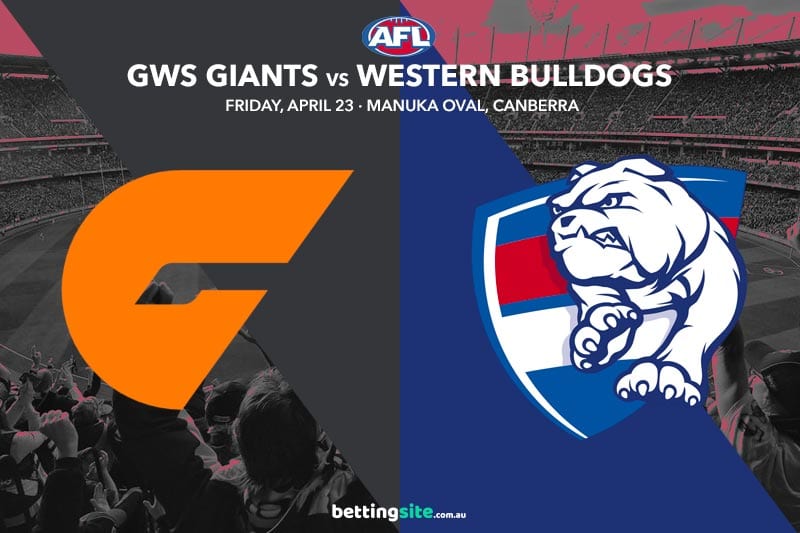 The GWS Giants will look to make it three wins in a row when they take on the undefeated Western Bulldogs this Friday night at Manuka Oval to kick off round six of the 2021 AFL season.

These two teams have forged a fierce rivalry in recent years, with the Bulldogs edging the head-to-head count with seven wins from 13 meetings.

Leon Cameron’s Giants will look to level the ledger this week, but that will be no mean feat when facing a side that tops the AFL ladder with a percentage of 178.6.

Both teams may look to make a change to their starting ruckmen this week. Matt Flynn is a chance to replace his veteran teammate Shane Mumford, who could be due for a spell after two bruising weeks in the seniors, while Stefan Martin should return for rookie Jordon Sweet after resting in round five.

Both teams will make forced changes this week, as Giants defender Sam Reid injured his hamstring and Bulldogs stopper Bailey Williams broke his collarbone. Caleb Daniel will return from suspension for the Dogs, while Luke Beveridge could also bring in a taller option such as Zaine Cordy to tackle the imposing GWS forwards. Harry Perryman is the obvious replacement for Reid if he is fit to return from illness, otherwise Tanner Bruhn could be considered after a great week in the VFL.

This could be the round where Leon Cameron debuts former Melbourne and Fremantle forward Jesse Hogan, who has finally got his body right and is hitting the scoreboard with regularity at VFL level.

Bailey Williams would have been one of the Western Bulldogs’ best options to tackle Toby Greene, but his collarbone injury will force another defender into the tricky situation.

Hayden Crozier returned from a two-month shoulder injury last week and showed no signs of rust. The Bulldogs defender has excellent attributes in the air and good agility on the ground, allowing him to keep up with the illusive Greene.

Greene had kicked five goals in two consecutive matches before booting 1.7 last week. It is unlikely that he will struggle quite so much with his accuracy this week.

Having dominated the competition for the entire month of April, we expect Toby Greene to keep his excellent form rolling with a big night in front of the sticks. Greene has kicked multiple goals in his last eight matches against the Bulldogs, including five outings with over three majors, and we are backing him to kick three or more again this Friday.

After beating Collingwood and the Sydney Swans in the past two weeks, the Giants are a far bigger threat than the online bookmakers are giving them credit for. The Giants have beaten the Bulldogs in their last two meetings at Manuka Oval, which includes an 82-point belting back in 2018. They may not win the match in the end, but GWS should cover the spread on this occasion.

Even though the Western Bulldogs have not lost a game this season, we think this clash against will go down to the wire as the Giants hold the +19.5 line. Tim English collected over 15 disposals in his last two clashes against GWS, so we expect the mobile ruckman to clear that mark again this Friday night. Throw in Toby Greene for three or more goals, and you can get an $8.25 return at Sportsbet.