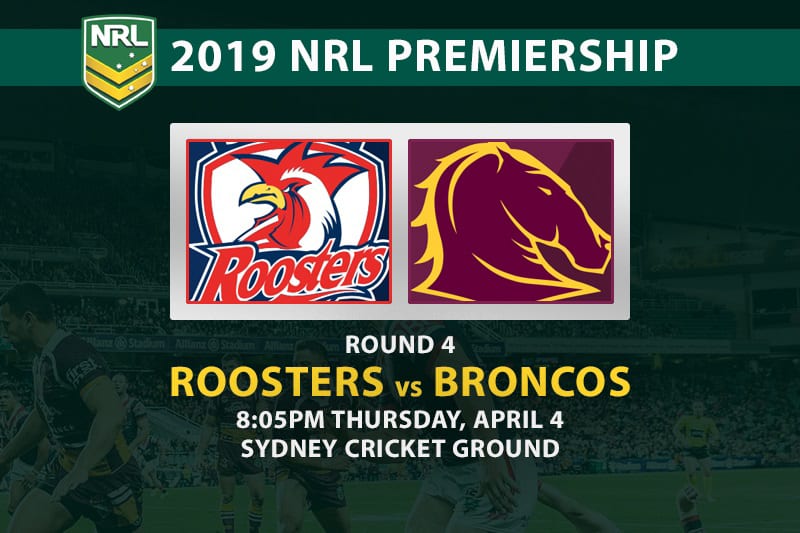 Sydney Roosters – $1.54 at Sportsbet
Brisbane Broncos – $2.54 at all our trusted online bookmakers

We are only entering the fourth round of the 2019 NRL season but it already feels this match up between the Sydney Roosters and the Brisbane Broncos is a pivotal one.

The Roosters will be full of confidence after overcoming a second half deficit to defeat the resurgent Eels on the back of a virtuoso performance from James ‘Teddy’ Tedesco.

The fullback scored two tries and was by far the best man on the field as the Chooks moved their record to 2-1.

In an additional boost for the home side, superstar halfback Cooper Cronk returns since injuring his hamstring the opening round of the 2019 NRL season.

It’s not exactly dire just yet for the Brisbane Broncos but another loss like the one they suffered last Thursday will likely send the good people of Queensland into a panic.

Despite leading at halftime 12-10 the men in maroon never truly looked comfortable against St George and were eventually outclassed at home by a team they were favoured to beat.

The Broncos are flattered by their ninth position on the ladder given they are locked on just two points with eight other teams, including the Canterbury Bulldogs in second last.

Thursday’s task is made all the more onerous by the loss of NSW State Of Origin representative James Roberts, who could miss an extended period of the season with an achilles injury.

Teddy was brilliant last week in the Chooks’ late surge to topple Para, scoring two tries in what could be his best game in the Tricolours.

The NSW represetative scored the opening try for Sydney before finishing off the game in the dying stages by crossing the line once again. The fullback’s ability to make the play for his side is exceptional but the thing that sets him apart is his try scoring prowess.

Look for another sharp performance from the man they call Teddy on Thursday.

Best bets for Roosters vs Broncos

The Roosters clicked into gear last week after conceding the lead to the Parramatta Eels, which we think will be the defining moment in their season. The addition of Cronk also is a huge factor, as his leadership qualities cannot be denied.

The Broncos are without the Jet for the foreseeable future and after their disappointing showing at home to the Dragons we’ve lost a lot of faith in the Brisbane side.

We’re confident the Roosters get the job done against the Broncos and we’re backing in Teddy to score along the way.

James Tedesco to score a try and Sydney Roosters to win – $2.80 at Sportsbet