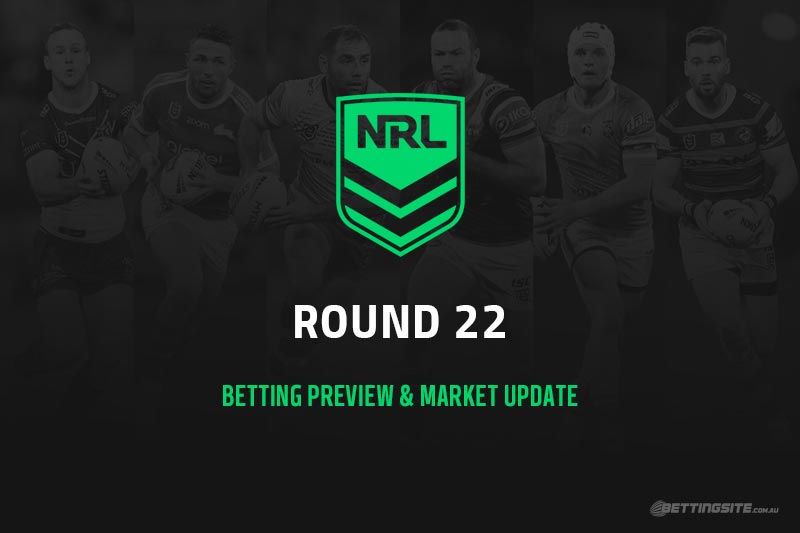 The final month of the NRL 2021 regular season is upon us, and there are games on the horizon which could prove vital in shaping the finals series.

The Canberra Raiders will have to climb the NRL’s version of Mount Everest and defeat the Melbourne Storm to keep their place in the top eight. The Storm haven’t lost a game in Queensland since 2017, so the Raiders will have to play out of their skins to maintain control of their destiny.

The Gold Coast Titans’ charge to a finals berth will continue when they take on the red-hot South Sydney Rabbitohs in a bid to remain in seventh place. They’ll have to overcome a club who has scored more than 30 points in each game of their nine-game win streak.

Perhaps the biggest game of the weekend that has a bearing on the finals race is the match between the Cronulla Sharks and Newcastle Knights.  They played out a thriller in Round 6, and the Sharks’ capitulation against the Warriors in Round 21 has opened up the door for the Knights to create a four-point buffer on Cronulla.  It would also put the Knights back in seventh by a clear two points if the Raiders and Titans do what they’re expected to do and lose.

The top six have virtually guaranteed their place in the finals, but the race for seventh and eighth continues and Round 22 looks to be moving day for several clubs.  While the venues for the weekends game are still being sorted by NRL HQ, let’s take a look at where the money might go for the upcoming games.

To the surprise of absolutely nobody the Melbourne Storm are going to be red-hot favourites as they go for an 18th consecutive NRL win. The two points against Canberra would break the record for the best winning streak in the NRL era and also bring them within one game of tying the 1975 Roosters for the greatest consecutive win streak in the history of rugby league in Australia. The Storm are expected to be at the $1.10 price or shorter to get the win when betting markets open, while the Raiders could drift into the $7-$8 range, even though they themselves have won four of their last five games.

The party at Paul Vaughan’s house over the Dragons bye weekend has absolutely decimated their season. While they are still mathematically in the hunt in 10th spot, they haven’t won a game since the bye. Even in that Warriors win in Round 16, they fell over the line. They’ve lost four straight and have the task of taking on the Penrith Panthers who could have Nathan Cleary return from his shoulder injury. Even if Cleary doesn’t return, the form of Matt Burton in the halves in their win over the Roosters should fill Penrith fans with plenty of promise and the Panthers should get the win as a short-priced favourite.

Over the past few weeks, Brisbane have put together some great patches of football as well as a complete performance against the Cowboys for a dominant win. They might have the advantage of playing at home for this game, but the expectation is for the Roosters to be too strong. Brisbane did cause one of the biggest upsets of the NRL era as a $13 outsider to defeat the Tricolours back in Round 11, but the crackdown on head contact responsible for Victor Radley being sin-binned multiple times is well and truly in the past, ruling out the chance for any funny business influencing the result.

The Gold Coast Titans have been in terrific form over the past month, but they face their biggest test of their 2021 NRL season so far when they take on the South Sydney Rabbitohs. The Bunnies are on a current five-game win streak over the Titans and have not lost to the Titans on the Gold Coast since 2009. That magnificent record should see them to come in at around the $1.25 mark when the betting opens. Souths have won nine games in a row and scored at least 30 points in eight of those nine victories, so expect the lines to be high both in the head-to-head and over/under markets. The Titans have improved in recent weeks, but their defence still has huge concerns, and a Rabbitohs victory by the 13+ margin is going to be the popular bet in this contest.

Can the Cowboys avoid a ninth consecutive loss, or can the Tigers move closer to the most unlikely NRL finals berth in recent memory? A win for Wests would move them to 18 points and quite possibly just one win from eighth spot with three games remaining, but a loss will almost certainly end their season. The commentary surrounding Jason Taumalolo’s move to the second row and how poorly it has gone almost certainly means the Kiwi star will move back to the middle, making the Cowboys just that little bit more formidable. When these two clubs met in Round 5, the Cowboys were rank outsiders and the Tigers dished up a horrible performance in front of a sellout crowd. Will history repeat in this contest, or do the Tigers stay alive one more week?

This is the pick of the games for Super Saturday. While there is always plenty of drama when the Parramatta Eels and Manly Sea Eagles meet, expect the pressure gauge to be turned up to 10 as the Eels look to avoid a fourth-straight loss. Their tough run into the finals has only been made harder, with Reed Mahoney being ruled out for the season with a repeat of his shoulder injury. It leaves a lot of pressure on Joey Lussick to come in and play that hooking role like he did earlier in the season. The Eels have a 2-5 record this year against the other top-six sides, and the two wins themselves have big asterisks next to them. Their premiership credentials have been laid bare and it doesn’t make for pretty reading. The Sea Eagles have gone 12-4 in their last 16 games and gave Melbourne a big run for their money last week, so they’ll come in as the hot favourite despite Parramatta being ranked higher on the ladder.

While there is a lot riding on every other game this weekend, this becomes of the first of the games in 2021 that has no bearing on the top eight. (It would have been a perfect chance to trial rules changes instead of introducing them on the fly, but we digress.) The Warriors have found plenty of ways to lose games in 2021, but one thing that cannot be questioned is their heart. Despite everything that’s happened in their season, they’ve been able to show up and compete hard each week and could once again prove to be a headache for teams above them. On paper they have too much class for this Bulldogs outfit and will probably be given -8.5 by NRL bookmakers, so expect a close game.

In terms of what is at stake, Newcastle Knights vs Cronulla Sharks is without a doubt the game of the round. Newcastle can open up a four-point gap between the two clubs with a win, following Cronulla’s inexplicable second half against the Warriors. Cronulla now find themselves in a ‘win or go home’ situation realistically and they face pressure of trying to find the right team on selection night to get the job done. Newcastle should come in at around the $1.60 price in the head-to-head market on the back of their two wins over Canberra in Brisbane. They’ll have had a 10-day turnaround to prepare for this game and they finally look to have a settled side on paper, which is something they haven’t had all season. Expect the line to be just -6.5, remembering that the two clubs played out a thriller in Round 6 which was decided in the final moments.