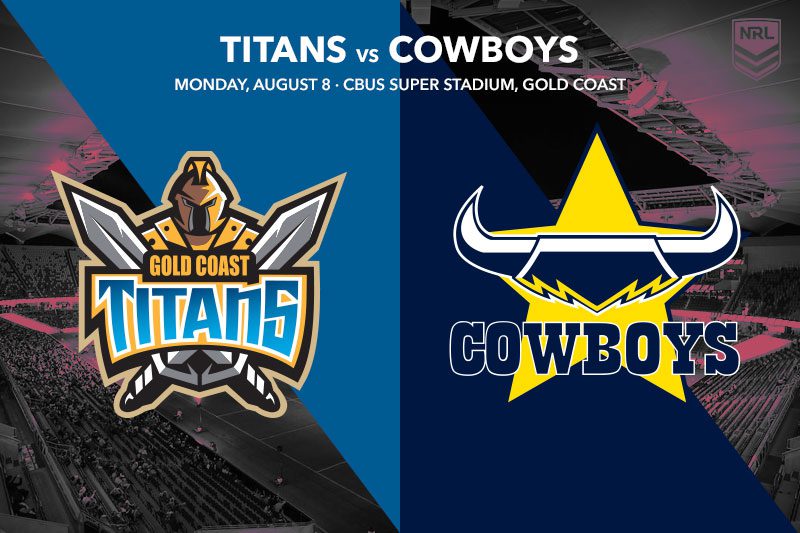 Round 21 of the NRL Premiership will conclude at Cbus Super Stadium on Sunday afternoon when the Gold Coast Titans host the North Queensland Cowboys. A win for the Titans would have them in the top eight with just four rounds to play, while the Cowboys are playing for season 2022 having lost their last seven games on the trot. Gold Coast are the $1.30 favourite heading into the game and will stick largely solid with the team who have won three of their last four games. Tyrone Peachey will be out of the side as he serves a one-match suspension, giving Erin Clark to play the utility role off the bench. The Cowboys will get Valentine Holmes back into their starting line-up at fullback, who has missed several weeks with a shoulder injury he sustained in Origin III for Queensland. Coach Todd Payten has also pulled a selection shock by naming captain Jason Taumalolo in the second row to give Coen Hess a chance at lock forward, which pushes Mitchell Dunn back to the interchange along with Jake Granville, who had been the back-up fullback for Holmes.

The -12.5 line for the Gold Coast Titans feels bang on the money for this game, but when you look at their last three wins, they’ve won them all by 20 or more points. Once this team gets downhill, they are hard to stop and playing against a team low on confidence after seven-straight losses, they might get downhill early in the game. One multi leg option for punters might be to include some ‘race to x points’ for the Titans, who score in big bunches. David Fifita is back in the starting line-up and is a juicy $13 to score the first try, and he might be the pick of the bunch as he gets a chance to silence a few critics who think he has tailed off after a strong start to the season. Brian Kelly at the $2 price is another nice value option to back as an anytime scorer, and the $1.80 for AJ Brimson is another player punters must include.

Five of the North Queensland Cowboys‘ seven losses on this current streak have been at the 13+ margin, so the +12.5 handicap is in huge danger. If punters are looking for the underdog to have the first try scorer in the game, Valentine Holmes has been the first scorer in two of his last three games against the Gold Coast at this venue, so the $18 is a fantastic price if you fancy the Titans getting a slow start in this game. Kyle Feldt has scored in 66% of his NRL appearances throughout his career, so to be still getting $1.80 for him to cross the line at any time is a price any footy fan should take up. Both clubs in this game have hookers who love to crash over from short distance and pinch a try, but Reece Robson is the more accomplished of the two players. He has five tries in 2021 and feels due to cross again against a side who can be suspect defensively through the middle, so why not take the $5 for an educated throw at the stumps.

You can’t help but get excited when you see AJ Brimson and Valentine Holmes both named to start at fullback. Holmes has his detractors who believe he is better suited to play on the wing, but he has an explosive running game that is going to be suited to a dry and warm CBUS Super Stadium on Sunday afternoon. Both he and Brimson are terrific support payers and regularly threaten to make linebreaks through the middle of tired forwards. Brimson will follow prop Moeaki Fotuaika relentlessly because of his ball-playing ability, while the ability of Reece Robson of knowing when to pick on the markers is where Holmes will get his opportunities.

The Titans will win this game and they cover the -12.5 line. It should be a high-scoring affair, so the over on the 54.5 total points line is well and truly on as well.

Titans -12.5 with AJ Brimson, David Fifita, Kyle Feldt and Valentine Holmes all scoring a try gives punters $37.75, and one would have to think that’s a red-hot chance to get up.