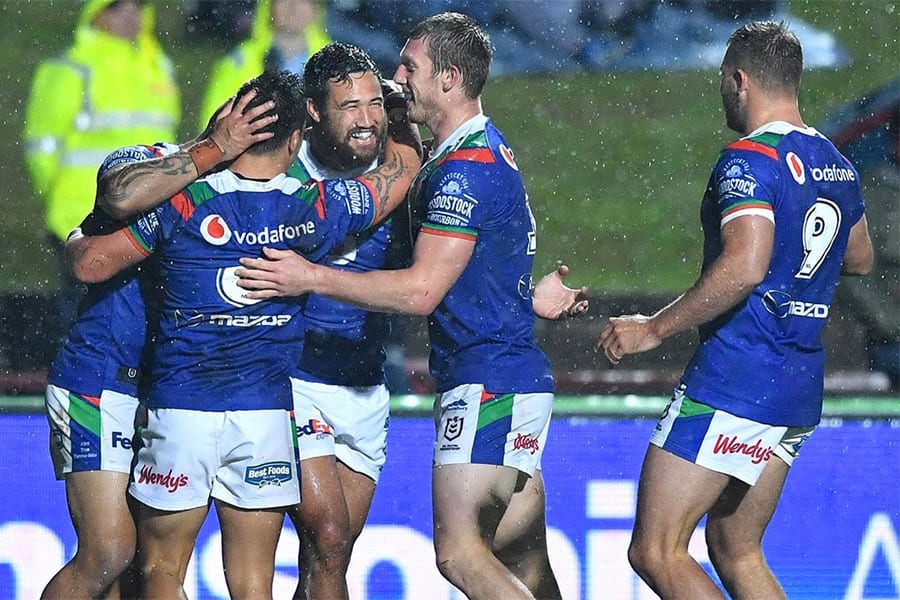 If you had the Wests Tigers to make the eight, rip up your betting slip.

If you did the same for the Manly Sea Eagles, hold onto it one more week.

And if you’re the punter who won $47,190 from a $100 AFL/NRL same-game multi, may you fill in many more bet slips and celebrate in style.

All in all, it was another fantastic week of footy which saw contenders draw a line, Newcastle pile on the punishment and South Sydney beat yet another bottom-eight team.

Let’s take a look back at how all eight games panned out in round 13 of the 2020 NRL Premiership.

We anticipated a close game down in Wollongong, and the $2.90 for the Sydney Roosters to win by 1-12 points proved to be a great way to start the weekend.

Sio Siua Taueaiko put on one of the best performances from a prop this season, running for over 300 metres while acting as the team’s first-choice goalkicker.

While the Roosters were far from what we have come to expect, they showed off their fantastic depth to win once again without many of their star players.

On the St George Illawarra Dragons‘ side of things, Zac Lomax put in another terrific performance and will soon get the attention of NSW State of Origin selectors. He looks to be a weekly anytime tryscorer option for NRL punters who love a multi bet.

Here is a sentence we didn’t expect to be uttering 13 rounds into the NRL 2020 season: The New Zealand Warriors remain in finals contention.

It’s an extreme long shot, but the mere fact we wrote those eight words tells you the wonderful job Todd Payten has done with the Kiwis over the last two months.

It’s their second win in a row, while taking care of the Sea Eagles at Brookvale, no matter how many they are missing, is a wonderful effort.

Manly missed a huge chance to move four points clear of the Tigers and keep touch with the top eight, but well done to those who were game enough to take the $4.50 on offer for the Warriors.

The South Sydney Rabbitohs have won six of their seven games against bottom-eight opponents, while their other win came against Cronulla in round one. Effectively, they are still to beat a good side in 2020, yet it may well be enough for the Bunnies to finish seventh or eight.

Souths have four games remaining against sides already out of finals contention, and 11 wins should be enough for them to get to the business end. If you had a bet on them to win the 2020 NRL Premiership, however, you should rip it up.

The less said about the Brisbane Broncos, the better. Their coach, trainer and Tevita Pangai Jr are all now in quarantine because of various (some necessary) bubble breaches, while Darius Boyd has hinted at a huge difference of opinion with the gaffer.

The Broncos appear to be on a dark path and no closer to getting off it. They may not win another game this year.

A centre who moves like Pavarotti on a skateboard, a fullback with a surfer’s haircut, a Canadian international and a Queensland Cup veteran on the bench. These are four players the Melbourne Storm fielded in their 41-10 victory over the Bulldogs.

They are just a wonderfully consistent team. At this point, they’d win games with eight paint cans and two flag poles in a purple jersey.

Josh Addo-Carr as our first tryscorer was an easy $7.50 return, and well done if you had him to score two or more.

We made a mistake and went against our own theory. Weeks ago, we hammered home the point how much the Storm love running up the score on bad teams, yet we went conservative in predicting a 1-12 result. Never again when Melbourne play bottom-eight sides.

Did anyone see a 44-4 win coming for the Newcastle Knights? The Tigers’ form coming in hadn’t been all that flash, but they were beyond horrific at McDonald Jones Stadium with continual errors coming out of their own end.

Despite missing eight regulars, Newcastle took the woeful Westies to the cleaners. It keeps them an outside chance at the top four, while their run home means it is almost a certainty the Knights will play finals football in 2020.

The points flowed far too easily due to some flimsy Tigers defending, so our under 38.5 prediction was blown away. Wests sit four points from eighth place, and there was just nothing in their performance to suggest they can turn the tide and make a late run at the postseason.

We thought the Raiders were terrific value at $2.75 underdogs in this contest, but the Penrith Panthers just blew them off the park to remain undefeated at home in 2020.

For weeks we have raved about how good these Panthers are. While they jumped out to a 24-0 lead, it was their defence in the first half which was the most impressive aspect against Canberra.

All the form indicated a close finish, but this game was decided within 25 minutes. That just goes to show how dominant the Panthers were to earn their eighth straight win.

The money should be flowing in for Penrith to win the competition by now, yet they still offer decent value at $4.50 in the NRL 2020 Premiership betting at Sportsbet.com.au.

Holy Toledo, the Gold Coast Titans went on a tear and shredded the Cowboys defence with alarming regularity. They moved the ball extremely well to open up a 20-0 half-time lead.

We thought Anthony Don may score back-to-back first tries and he did so, which was great news for everyone who threw their cash down on the ageless Titan.

The Cowboys managed to score two quick tries to make a game of it, but the Titans held firm to get their fourth win of the season.

They now have one more victory than the Broncos. If you had a market for that in March, almost everyone would have backed Brisbane. Good things happening on the Coast.

The Parramatta Eels scored fewer tries but won the game. This has been the massive change in their game compared to 2019 – they’re now happy to win by any means necessary.

Ugly wins far outweigh pretty losses, but the Cronulla Sharks can take a lot from this game. While they may not have got the two points, scoring three tries in such torrential conditions is a testament to the attacking skills they possess.

The Sharks have won six of their last eight games and look as though they’ll finish somewhere between fifth and eighth. That is a big effort for a team that looked in danger of sliding into wooden spoon contention at one stage.

Unfortunately, the weather played such a huge part in this contest tat the over/under was never under threat, but you can bet plenty got on the unders once the rain settled in.