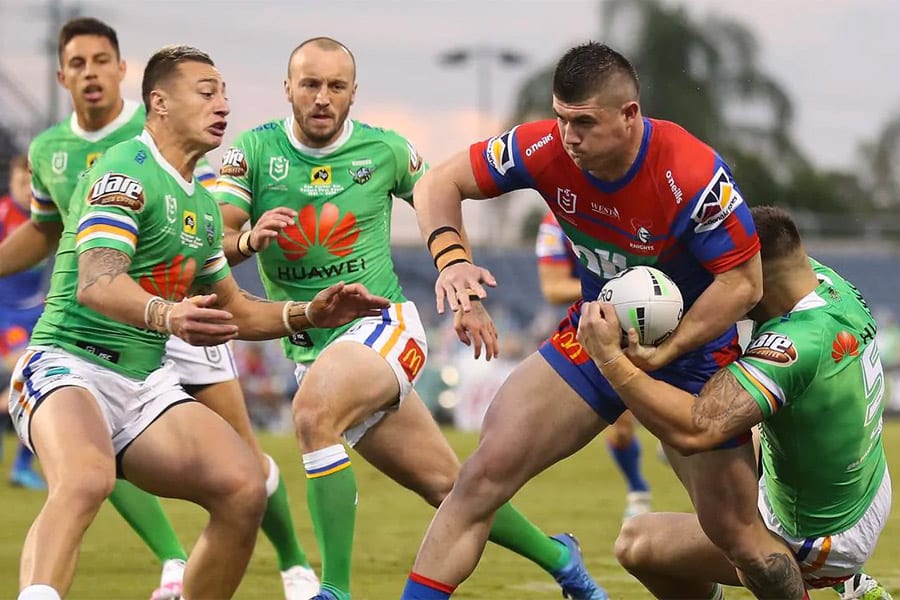 How are the major 2020 NRL betting markets looking after 13 rounds? Let’s take a look at the latest rugby league futures odds at Sportsbet.com.au.

Still some value for Panthers in NRL Premiership betting

While they still sit at the $4.50 price, put your cash on the Penrith Panthers.

They share that quote with the Storm, while only the Roosters ($3.25) are shorter in the NRL 2020 outright betting.

Given the Panthers are riding high on an eight-game win streak, one should expect to see some big sums start to roll in for the big cats out west while the odds are still somewhat decent.

A few weeks ago, it started to look like the NRL minor premiership race would go down to the final round of the season.

One crucial point is all that separates Penrith from the Melbourne Storm at the top of the table, but the Panthers have just two games remaining against teams currently in the top eight.

They have shortened to $1.75 for the minor flag, which suggests online bookmakers have received some big bets on the league leaders of late.

The Storm have a difficult fortnight ahead taking on the Roosters and the Eels without Cameron Smith, with the clash against Sydney at the SCG looming as what some might call a ‘scheduled loss’.

Can the Knights squeeze into top four?

Barring a collapse from the Roosters and Eels in the final seven weeks of the 2020 NRL season, they will round out the top four behind the Panthers and Storm.

The Newcastle Knights aren’t without a hope, however, as their schedule is heavy on home games for the next four weeks and they have just two games left against top-eight clubs.

They sit at $11 after they were as short as $2.75 just a few weeks ago, but they should win five of their next seven games to move to 25 points.

The Roosters only need to win four of their next seven to finish on 26, so the Knights need the Chooks to falter somewhat, but their round 18 clash at the SCG could very well turn into a playoff for fourth place should there be a few upsets along the way.

Unbelievably, the Gold Coast Titans are the highest-ranked Queensland team and will be bolstered in 2021 by David Fifita and Tino Fa’asuamaleaui. Oh, how the rich get richer!

All jokes aside, the fact both the North Queensland Cowboys and Brisbane Broncos sit behind their little brother is an indictment on both organisations.

Brisbane have been a great of example of the exact opposite of how an NRL club should be run on and off the field, while North Queensland have some nice pieces who are far too often injured, some young players who aren’t ready to contribute consistently at this level, and a new coach for the first time in seven years.

Both the Broncos and Cowboys are genuinely in a race for the wooden spoon, sitting just one win above the favoured Canterbury-Bankstown Bulldogs ($2.10), and some important clashes ahead could determine the fates of the four teams in the hunt for last place.

The Titans and Bulldogs face off in round 17, while the Broncos play both the Titans and the Cowboys on their run home. The Queensland derby in round 20 could well be a wooden spoon playoff – a situation deemed almost impossible in the preseason.