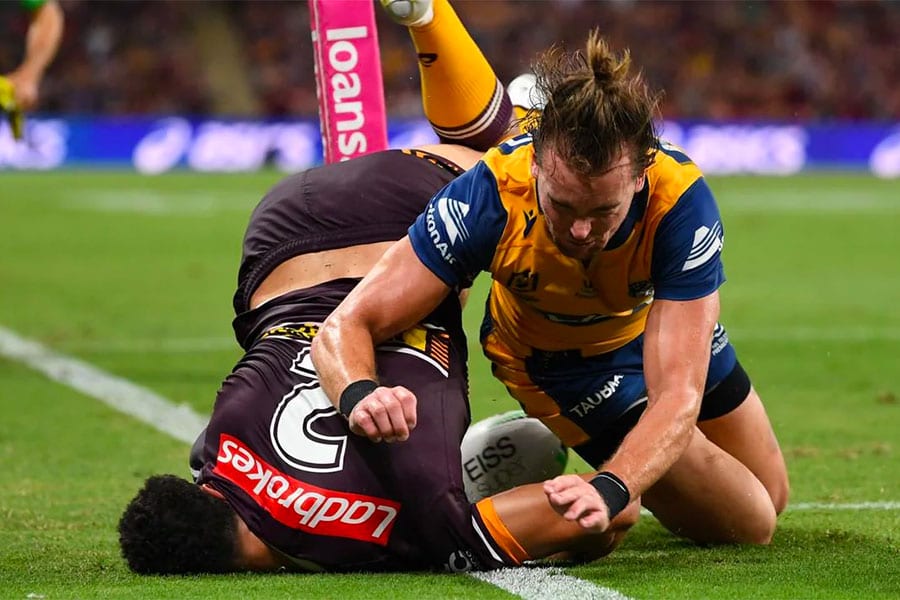 Round one of the 2021 NRL Premiership is done and dusted, and depending who you follow, you’re either winning the competition or taking out the wooden spoon. There is never any middle ground with crazy early-season hot takes. Funnily enough, we completed the sweep and picked eight winners, so well done to all eight premiership sides of 2021…

Was there ever a doubt the opening round losing streak would end? We loved the -1.5 start for the Melbourne Storm, and it felt home and hosed within the opening half hour. Souths performed much better in the second half, but it was the Ryan Papenhuyzen double in the back end of the opening stanza that blew the game open. Melbourne have just completed one era of a big three, and it looks as though they’ve begun another with Papenhuyzen, Cameron Munster and Harry Grant. It’s not unlike Wayne Bennett sides to start a season nowhere near their best, and this was exactly the case. Don’t be put off by it; they should be backed off the map next week against Manly. A few of our tryscoring predictions were a bit left of centre, but most importantly Tom Burgess left hospital Thursday night after picking up a burner late in the game at AAMI Park.

It looked like the classic danger game we had predicted as the Bulldogs got out to a 10-8 lead at the break, but the experience, continuity and overall depth of squad came to the fore for the Newcastle Knights. Jayden Brailey almost felt like a new recruit after just two games in 2020, and his class around the ruck was a highlight, as was the club debut of Tyson Frizell, who played his best NRL game in three seasons. Was anyone game enough to back Daniel Saifiti to score a double in his 100th game and captaincy debut? A stunning performance. The only lowlight for the Knights was a knee injury to Kurt Mann and an ankle problem with Bradman Best. Canterbury can take a few positives from the game – mainly Kyle Flanagan, who looked organised a halfback and picked up three try assists. They had great shape and bodies in motion in attack, but the longer the game went, the more stagnant they got. They face a tall order against Penrith in round two.

It looked like a perfect start to the ‘Kevolution’ as the Broncos took a 16-0 halftime lead, but injuries to Xavier Coates, Matt Lodge and John Asiata always meant that trying to defend a lead against a Parramatta Eels team with plenty of strike was never going to be easy. A 24-0 second half from the Eels was a great response, and they showed a calm demeanour knowing they were against a 14-man outfit. Unfortunately, the long -15.5 start we liked for Parra didn’t come through, but Blake Ferguson is going to be a tryscoring option in the coming weeks. He crossed with a fantastic effort in the corner, so be sure to remember ‘Fergy Ferg’ when putting your tips in for round two.

End-of-season winning streaks when the pressure of making the finals has been taken away are always fraught with uncertainty, and quite often it leaves fans and experts with egg on their face when previewing the next season. The Gold Coast have plenty of talent, but it will take a few weeks for them to start finding their groove, hence why we loved the New Zealand Warriors as a good underdog bet in this one. Kodi Nikorima won the all-important matchup, and it led to an unexpected 13-plus result – just the second at Central Coast Stadium since the Warriors made it their adopted home. The Warriors might not have the depth to be a top-eight side, but they’ll cause plenty of headaches for teams at the top of the ladder. Addin Fonua-Blake was outstanding on club debut, and if NZ continue to show enthusiasm to get into the grind and complete at a high rate, they will be the tipsters’ nightmare. They are $2.15 outsiders for their game against Newcastle, and that looks like fantastic value after the Knights copped another injury in the halves.

Just what the Sea Eagles did during their offseason is anyone’s guess, but considering their awful defence in 2020, it must have been upsetting for their fans to see them concede 46 in round one. Unless they can get Tom Trbojevic back and fix their indecisive edge defence, they look like wooden spoon contenders, and the $10 for that is still a terrific price if you are buying the horror show they put out. We thought James Tedesco was an easy anytime tryscorer bet (cha ching!), but getting a hat-trick alongside the ageless Brett Morris was something else. The only time we can recall two teammates scoring individual hat-tricks in the same game was Shaun Johnson and Manu Vatuvei back in round 25 of 2013, so that’s a rare feat for the Sydney Roosters stars. If you had the Roosters making the top four, you’d have to feel pretty good about that prediction.

Many thought they were capable of being a top-eight team in 2020, but it looks as though North Queensland’s road back to premiership contention is longer than we thought. Coach Todd Payten has already challenged Jason Taumalolo publicly as he tries to change his role within the team, and the flow-on effect could be a rough few weeks for the team as a whole. It felt lazy to label the 13-plus result in this game as a lay-up, but it was never going any other way. Even Payten said it should have been 50-0. Everyone and their dog knew the Penrith Panthers would be a force to be reckoned with in 2021, but why did Charlie Staines decide to not show up to the party? His tryscoring ratio is now at a ‘mediocre’ 2:1, but don’t lose faith!

At halftime it was 6-6 and a runaway Canberra Raiders win just didn’t look like happening. They looked flat in the opening stanza and tried to play too sideways, while the Tigers showed up with terrific defensive energy. A great example of where the two teams are at is the opening set of the second half. Jack Wighton puts a kick up and Luke Garner tries to hold him back from chasing and gives away a needless, silly penalty; Wighton pats Garner on the head and chuckles, knowing that was the opening they needed to assert their authority; from that moment, it was game over. Jordan Rapana got another double against the Tigers to make it 13 tries from 10 games, and we suspect many would have got joy from that result. The Raiders comfortably covered the -9.5 line we predicted, and the moment of the day might have been Ryan James crossing for a try to complete his 678-day absence from the NRL.

It was a derby game and a great chance for the Dragons to silence some critics, but they only gave the haters more ammunition. Outside of Paul Vaughan, their forwards offered very little and were soundly beaten in the middle of the park, making it easy for Chad Townsend and co. to control the game. The Cronulla Sharks won this considerably easier than we thought, and that will make coach John Morris sleep a little easier as whispers about his coaching future continue to linger. The Saints couldn’t cover the line for us, while Ronaldo Mulitalo could only cross in the 62nd minute and not first. This was one to forget after plenty of winners and a few margins thrown in.