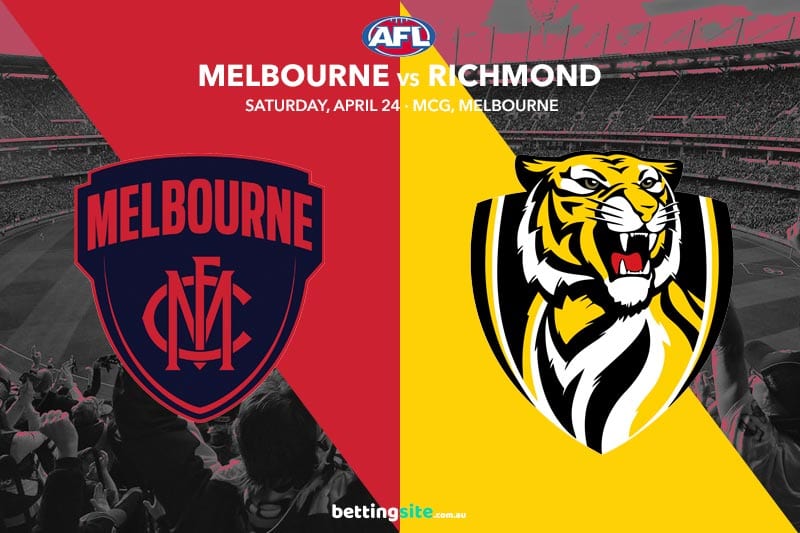 You cannot miss the ANZAC Eve clash between the Melbourne Demons and Richmond Tigers this Saturday night at the MCG in round six of the 2021 AFL Premiership.

The Demons and Tigers have both started their 2021 campaigns in fine form, sitting second and fifth respectively on the AFL ladder.

Simon Goodwin’s undefeated Demons are looking to take their record to 6-0 this Saturday, but Damian Hardwick’s Tigers have not lost to Melbourne since 2016.

It will be a big week at the selection table for Goodwin and the Melbourne match committee, as Sam Weideman, Ben Brown, Steven May and Bailey Fritsch are all putting their hands up.

Both teams have controlled opposition scoring extremely well this season; the Demons are ranked second for points conceded, while the Tigers sit third in that list. This clash of stingy backlines points towards a close, low-scoring game, pushing us towards the unders on the total points line of 156.5 at $1.90 with Sportsbet.

Max Gawn has been unstoppable in the ruck for Melbourne this season, giving his midfielders quality service around every stoppage. Toby Nankervis does not match up well with Gawn, so you should include more Melbourne midfielders in your disposal betting selections.

Richmond spearhead Tom Lynch has kicked three goals in each of his last two meetings with the Demons, but he might find it a little tougher this week with Steven May set to return for Melbourne. Look instead to the likes of Jack Riewoldt, Jason Castagna and Daniel Rioli in the goalscorer markets at AFL bookmakers.

It is easy to draw comparisons between Christian Petracca and Dustin Martin, as they are two of the most explosive midfielders in the league. Both players are renowned for their ability to make an impact in the forward 50, and this one could come down to which of Petracca and Martin has the bigger influence on the scoreboard.

Christian Petracca to get 30+ disposals

Melbourne’s midfield maestro collected a career-high 36 disposals against the Cats at the MCG in round four, so there is no doubting his credentials on the big stage. Max Gawn’s tap-work has cut out half the work for Petracca, giving him silver service week after week. Petracca had 27 disposals against the Tigers in shortened game-time last season, so he is every chance to rack up 30-odd this Saturday.

We fancy the Demons to break their losing streak against the Tigers, as this is the best football they have played in years. Nathan Jones will play his 300th game this Saturday, and we believe this is the strongest list he has played with throughout his entire career. The midfield combination of Clayton Oliver, Christian Petracca and Jack Viney has worked brilliantly this year, and they should get the job done this weekend.

The Dees will remain undefeated in a close one at the MCG, with Christian Petracca and Dustin Martin putting on a show. The massive advantage of Max Gawn will help Petracca get his 30 disposals, while Dusty will be hard to stop when he roams forward.