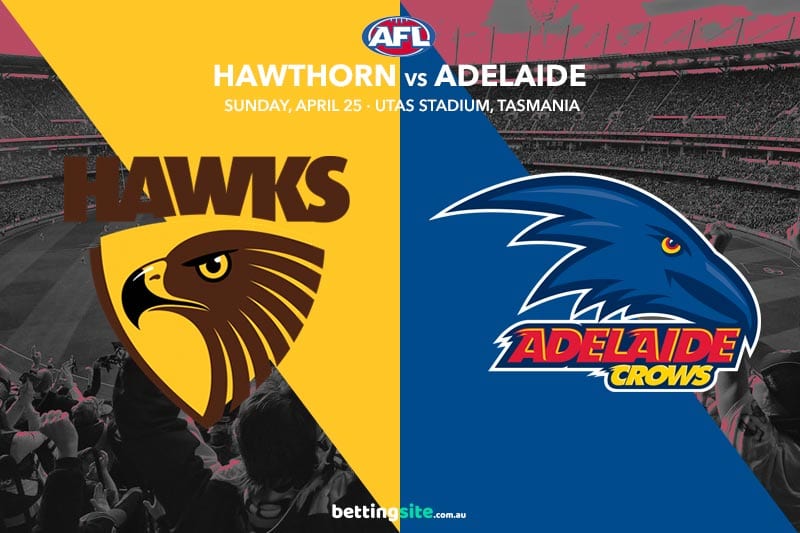 AFL footy heads to Tasmania for the first time this season as Hawthorn and the Adelaide Crows face off this Sunday in one of three ANZAC Day clashes.

Alastair Clarkson’s Hawks have built a strong following on the Apple Isle, where they own on of the best winning records in recent history.

The Hawks have won 49 out of their 64 matches in Tasmania, so the Crows will have to bring their A-game if they intend to bring the four points back to the mainland.

Matthew Nicks’ men have already equalled the three wins they mustered in 2020, and a victory this week could launch them into the top four if other results fall in their favour.

This will be the first time in 2021 that Hawthorn start as favourites with online bookmakers. The Crows are coming off a tough loss to Fremantle at Adelaide Oval, but they should still put up a big fight this weekend.

Tall forwards have been hard to stop this season, and none more so than Taylor Walker for the Crows. Tex leads the Coleman Medal race with 22 goals in five matches, and he could kick another bag this Sunday since James Sicily is out with his ACL injury.

The Hawks and Crows have had to use several younger players in their defensive units this season, which explains why they are both in the bottom five for points against. The loose defensive structures should allow both teams to hit the scoreboard regularly this weekend.

One of the big positives for Hawthorn his season has been the emergence of Changkuoth Jiath, whose run and carry from defence has made the Hawks dangerous in transition. Although CJ is an excellent distributor of the footy, his defensive skills are still raw. We expect him to line up on Shane McAdam, who should take advantage of Jiath’s inexperience.

Even though the conditions in Tasmania will not be perfect, both sides should be able to move the footy freely across the ground. With runners such as Paul Seedsman, Brodie Smith and Lachlan Sholl for the Crows, the ball will rarely be stagnant. Expect plenty of scoring opportunities at both ends.

Hawthorn to win by 1-39 points

The Hawks should break their four-match losing streak this Sunday at their fortress in Launceston. Alastair Clarkson has given his younger players consistent playing time this season, improving the team’s list strength. Although the Crows have started their season well, they will struggle without leaders such as Rory Sloane and Daniel Talia against a well-drilled Hawthorn outfit.

A young Adelaide Crows should give the Hawks a run for their money this Sunday, but the eventual winners will still be the Brown and Gold. Changkuoth Jiath will star at half-back for Hawthorn and rack up the disposals, while Tex Walker should kick a few goals to keep the margin below 40 points.