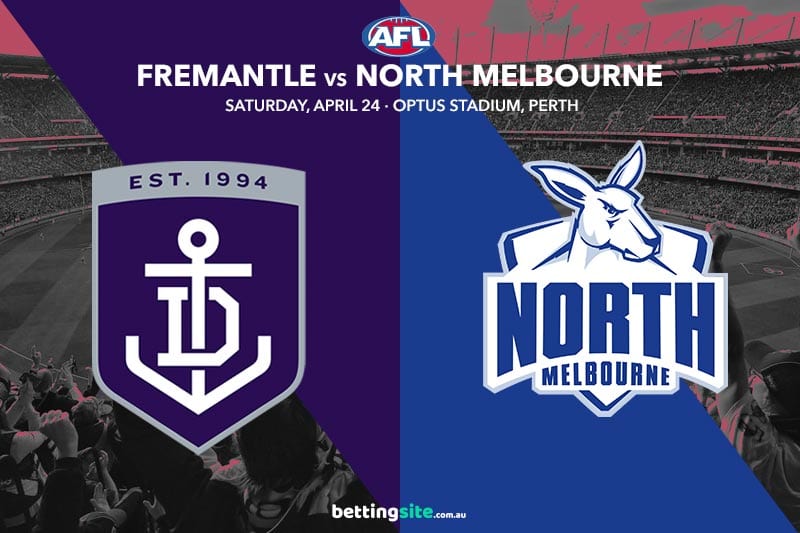 The resurgent Fremantle Dockers take on the winless North Melbourne in Saturday night footy at Optus Stadium. The Dockers are quietly going about their business to begin the 2021 AFL season, and this fixture presents a perfect opportunity to go 4-2. North, on the other hand… boy, are they struggling this year. It looks to be a tough road trip for the lacklustre Roos.

Fremantle head back to Perth on the back of a strong win over Adelaide last weekend, but they will be without young gun Adam Cerra (ankle). The Dockers are near unbackable in head-to-head markets, with online bookmakers installing them as $1.08 favourites for Saturday night’s clash.

North Melbourne will need a sharp form reversal if they are to beat Fremantle on their home deck. The Kangaroos are set to make the trip across the Nullarbor without Aaron Hall (concussion) and youngster Charlie Lazzaro (hamstring), who both picked up injuries in their loss to Geelong. Even with young guns Luke Davies-Uniacke and Cameron Zurhaar back in the side, the $8 quote for North looks to be a touch of unders heading into this Round 6 matchup.

How will Fremantle vs North Melbourne play out?

The Dockers got the better of Adelaide in the last quarter last weekend on the back of a fine display from David Mundy. The 35-year-old has wound back the clock this season after many wrote off the star Docker at the end of 2020. Mundy is averaging a shade under 25 touches a game to begin the year and looks set to continue that strong form against North, so the odds of $1.91 at Sportsbet for the Dockers champ to pass that mark this weekend are well worth a look.

North Melbourne’s big off-season recruit Jaidyn Stephenson has struggled in the past against Fremantle, kicking just five goals from four games against the Dockers. However, the former Magpie has booted two goals in each of his last three games, and we expect him to continue that run on Saturday night. The $2.70 price at BetOnline for Stephenson to kick a couple seems juicy enough.

Matt Taberner has emerged as one of the more consistent key forwards in the competition, delivering week in, week out despite regularly copping the opposition’s best defender. Ben McKay, meanwhile, has been punching above his weight for the entirety of his career and will be tasked with curbing Taberner’s influence this weekend.

Taberner has 13 goals from his first five games this year and is yet to kick less than two goals in any of his last six outings. However, McKay has performed well on the likes of Taylor Walker and Tom Hawkins in the past fortnight, and North will rely on him to do a similar job on Freo’s top forward.

It is worth noting that North Melbourne have only covered the line once in their last 10 games, which was last weekend against Geelong. However, Fremantle in Perth is shaping to be a tough task for the young Roos, who have yet to show the ability to put in a four-quarter performance. With odds of $1.67 available for Fremantle to win by 40+, it is a no-brainer to take them on at the line of 42.5 points.

Matt Taberner should enjoy getting back to Optus Stadium, which is the ground he has had most success at. Although Ben McKay was decent against Taylor Walker and kept Tom Hawkins to one goal, let’s not forget he had 10 kicked on him by Josh Bruce three weeks ago. Taberner should get a hold of McKay early on, and we are backing him to boot at least four on Saturday night.

This match is far from a must-watch, especially when it is going up against Richmond vs Melbourne in the Saturday night slot. If Fremantle wish to play finals this year, then they need to put away teams like North Melbourne. Jaidyn Stephenson has been the lone shining light for the Roos and should kick a couple, but Freo led by Mundy and Taberner will have too much class for this young North lineup.