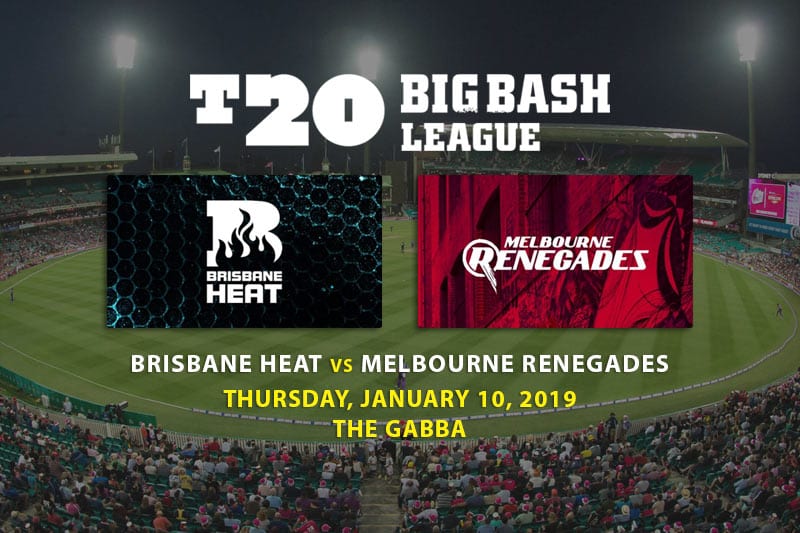 AFTER starting the season with three consecutive defeats, the Brisbane Heat are now only a game outside the top four.

The Queenslanders followed up their drought-breaking win over the Perth Scorchers with a rather fortuitous result against the Sydney Thunder on Tuesday night.

Having set an imposing total of 186 courtesy of big knocks from Brendon McCullum and Chris Lynn, the Heat bowled only five-and-a-half overs before rain sent them back to the sheds.

The Duckworth-Lewis method did the rest, granting Brisbane a 15-run win with the Thunder stranded on 2/34.

The Melbourne Renegades might lie outside the playoff spots, but they have achieved something no other team has managed thus far.

They dealt the Hobart Hurricanes their first defeat of the season on Monday night, with middle-order masters Dan Christian and Mohammad Nabi sealing out a six-wicket victory at Marvel Stadium.

Kane Richardson and Usman Shinwari did the early damage, removing the dangerous trio of Matthew Wade, D’Arcy Short and Alex Doolan inside three overs before George Bailey and Ben McDermott dragged the Hurricanes to 5/145.

Aaron Finch hit 42 in his first Big Bash League game of the summer, but Sam Harper stole the show – and Man of the Match honours – with a scintillating 32 from 18 balls at number three.

The Renegades are once again without Finch, who is away with Australia’s ODI squad, but lefty opener Marcus Harris returns after an impressive display in the drawn Sydney Test.

Cricket betting is all about reading trends.

One of the most obvious in the BBL is that batsmen who return from the international arena tend to find things pretty easy.

This is especially true when players step down from Test cricket, even when they are out of form.

We have already seen it this season with Finch and Peter Handscomb, while Usman Khawaja has made a mockery of the competition in years past.

Harris was Australia’s top scorer against India and finished the series on a high, so there is a very good chance he will hit the ground running in Brisbane.

Some online bookmakers have the Heat as the team to beat, while others favour the Renegades.

Brisbane are improving and will only get better if ‘Bash Brothers’ Lynn and McCullum continue to fire at the same time.

They are also starting to get more out of former Renegades quick James Pattinson, who is still working through the gears after a lengthy layoff.

The ‘Gades look good despite the number of rookies in their squad and have a talented core of allrounders in Christian, Nabi and Jack Wildermuth.

Harris is a big in and balances the loss of Finch, while the likes of Harper and Harvey have shown a bit in the absence of their more senior teammates.

You could make a strong case either way, but the Renegades and their multi-faceted bowling attack should have the edge.