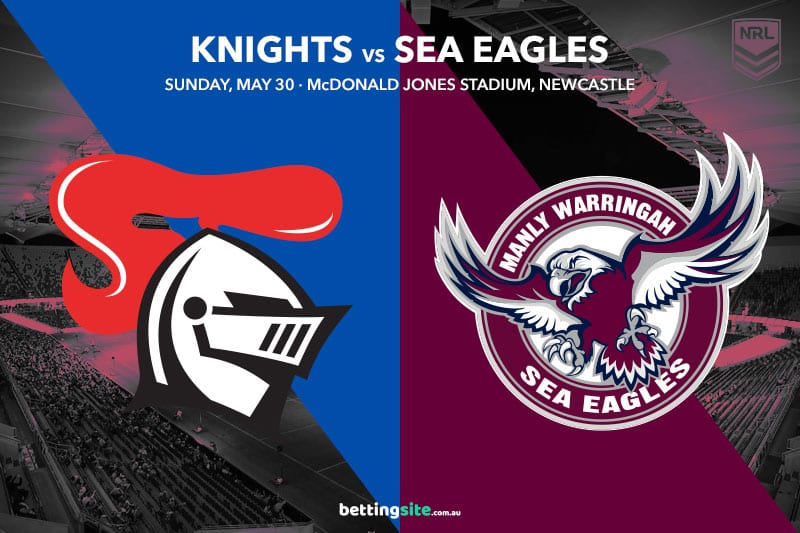 The high-flying Manly Sea Eagles will head to McDonald Jones Stadium to take on the Newcastle Knights this Sunday, and it could be a day where they launch an assault on the top four in the 2021 NRL Premiership. They only play one team inside the top eight between now and Round 21, so the expectations on them will only grow from here.

Newcastle have endured a wretched run of form, and their slide of three losses in 12 days left them flat and busting to get a 10-day preparation for this game. Veteran Blake Green also announced his immediate retirement, which has left them with even less experience in the key positions against a side who are humming in the playmaking spine.

Newcastle in their last home game were embarrassed by the Roosters and gave up 36 points in each game of their Queensland road trip, so have they addressed their defensive concerns ahead of a must-win game against an old rival.

Newcastle have been giving away far too many points to be a fair-dinkum chance of winning, but perhaps the overs on the -50.5 total might be one way you can get a win if you’re a Knights fan. Kalyn Ponga is the $15 favourite among the Knights players to score the first try, and you’d be mad not to take him if you think Newcastle can make a good start at home. In every game he has played this year, Ponga has been involved in almost every scoring play for his team. Starford To’a is a good anytime tryscorer option at $2.10 down the right side.

For the Manly Sea Eagles, Reuben Garrick is a great shout at $9 to score the game’s first try if you’ve studied the Knights’ recent defensive woes. Their right edge has been all at sea, with slow decision-making from the man defending three-in from the wing causing the likes of Enari Tuala and Starford To’a to rush in and make poor choices themselves. Tommy Turbo is a master of getting around a defensive line, and he will exploit this channel all afternoon. He is $8.50 to get the first try himself, but we feel like he is a better option for the multis as an anytime tryscorer. Punters should also get on Josh Schuster to get a try, as he is mounting a case to be the rookie of the year.

Kalyn Ponga and Tom Trbojevic might be the two most popular players among the kids in the competition, but fans of all ages should be excited by this proposition. Tommy Turbo’s seven-game form stretch is as good as we have seen from any player in NRL history, while Ponga is an excitement machine who is going to be at the centre of every Knights try they might score. The game revolves around these two players.

Manly should win at the 13+ margin as Tom Trbojevic puts on another show heading into the State Of Origin series. Newcastle are just too poor defensively on the edge, and their middle forwards are too lethargic to keep up with a Manly side who are fantastic at attacking tired defenders around the ruck.

Manly at the big margin with Reuben Garrick to score the first try at $12.50 looks like a nice way to finish Indigenous Round.