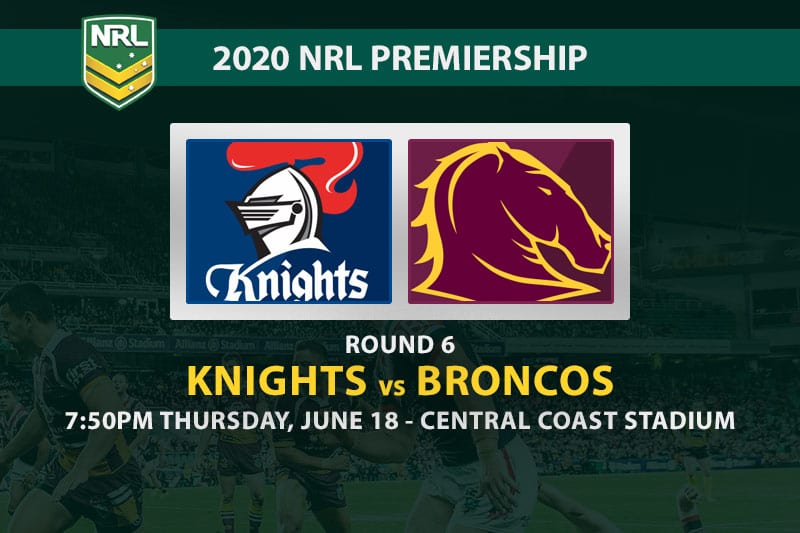 The Newcastle Knights were slow out of the blocks in their last start against Melbourne, but don’t expect them to start slowly in this contest.

The Brisbane Broncos will travel south once again but this time will take on a team who are hurting from a 14-point loss, rather than when they came up against a Manly outfit who expected they would wipe the floor with Anthony Seibold’s men.

The $2.85 at Sportsbet for the Broncos as the outsider is a big contrast to their $4.50 head-to-head price in their last start, and it shows the bookies and punters alike believed they are edging closer to a win.

The return of Tevita Pangai Jr from a four-game suspension will help to stiffen up the Broncos, as they are undoubtedly a better team with him in the lineup.

Brisbane did jump out to an 18-0 lead against Manly, but the NRL community would be stunned if they got themselves into a position like that again this week.

The battle of the big wingers will be one to watch as Newcastle’s Edrick Lee and Brisbane’s Xavier Coates go up against one another. Coates showed against Manly how prolific he can be in the air and Lee has created several tries this year due to his ability in the same area.

You should see plenty of money come in for both of these guys in the first tryscorer market, but given Alex Glenn will move to his non-preferred side of the field to play right centre, Knights phenom Bradman Best will also attract plenty of interest.

The Knights look much more dangerous in attack since David Furner joined the coaching staff this year. Teams need to score at least 26 to be a chance to beat them, but the Broncos under Seibold have hit that mark just five times in 30 games.

Best bets for Knights vs Broncos