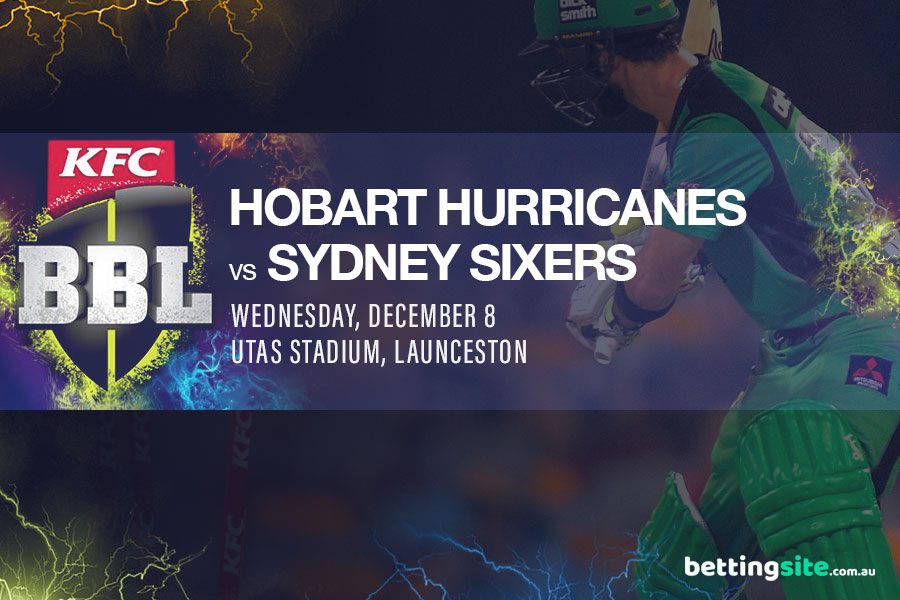 The Sydney Sixers will look to go 2-0 on the 2021/22 Big Bash League season when they face the Hobart Hurricanes in Launceston on Tuesday night.

The BBL9 and BBL10 champions got their title defence off to a flyer last Sunday, beating the Melbourne Stars by 153 runs to stamp out any uncertainty about their chances of completing a three-peat.

Josh Philippe kickstarted the carnage with 83 off 47 balls and Moises Henriques (76 off 37) kept it going, with James Vince (44 off 29) playing a solid supporting role as the Sixers posted 4/213.

Even a mediocre performance from the bowlers would have been enough to get the job done, but Steve O’Keefe (4/14) and Sean Abbott (3/14) were relentless as the Sixers skittled the Stars for only 61.

While that is not the sort of form the Hobart Hurricanes were hoping to run into for their first hit of the BBL11 campaign, at least they have something like a full-strength squad to choose from on Tuesday.

Matthew Wade and D’Arcy Short make up one of the most dangerous opening partnerships in the Big Bash League, while Ben McDermott, Caleb Jewell and Peter Handscomb have all hit centuries in state cricket this season.

The pace trio of Riley Meredith, Nathan Ellis and Joel Paris have all played white-ball cricket for Australia, and Nepalese leg-spinner Sandeep Lamichhane is a proven BBL performer.

Even so, the Hurricanes will start as $2.32 outsiders at home, with the Sixers paying $1.61 to follow up their opening-night heroics with a win at UTAS Stadium.

We hit the nail on the head by backing Philippe to make some runs against the Stars, but it was arguably Henriques who stole the show that night. The Sixers captain has made no secret of his displeasure at being left out of the Ashes squad, and it looks like he plans to keep showing the selectors what they’re missing out on.

Three days is a long time in the Big Bash League, but it is hard to ignore what the Sixers served up on Sunday. While it is unlikely the Hurricanes will be as bad as the Stars were that night, they will have to play mighty well to have any chance if the men in pink are anywhere near their best on Tuesday.