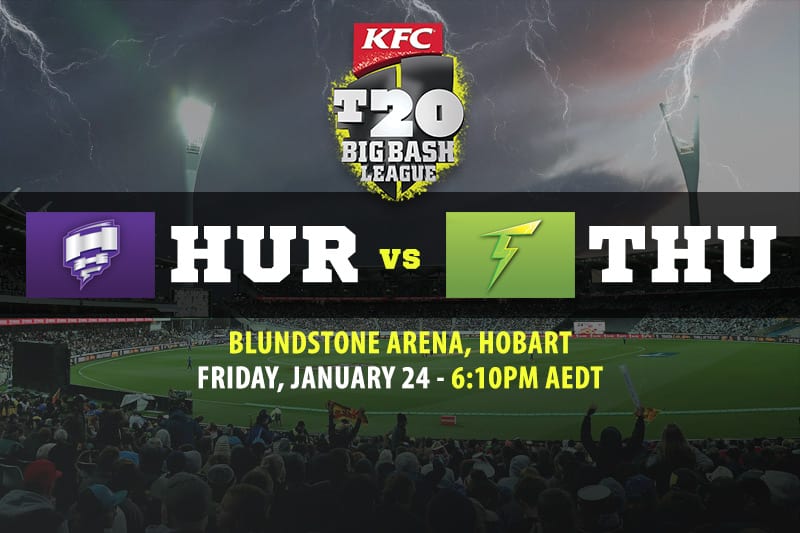 The Hobart Hurricanes are still alive and kicking ahead of Friday’s Big Bash League clash against the Sydney Thunder at Blundstone Arena.

As the 2019-20 BBL season comes to a close, the last few remaining games for the Hurricanes and Thunder are all early elimination finals.

The Hurricanes must win both of their remaining matches to have any chance of making the top five, particularly with the Brisbane Heat lurking on the fringe of the finals spots.

The Sydney Thunder sit fifth on the BBL ladder at the time of writing, meaning they just have to keep winning and don’t have to rely on other teams’ results.

The Hurricanes will have a huge batting boost for the run home, as D’Arcy Short returns to the Hobart lineup after carrying the drinks for Australia’s ODI team in India.

D’Arcy Short top Hurricanes runscorer @ $3.10 with Sportsbet
It had to have been a frustrating trip to India for D’Arcy Short. He did not even get to play in the ODI games, meaning he missed a chunk of the Hurricanes’ season for nothing. Short will swing back into the top end for the Hurricanes and immediately make up for the time he lost.

Callum Ferguson top Thunder runscorer @ $4 with Sportsbet
Whenever the Thunder win, the chances are that Callum Ferguson has played a terrific match. The captain of the Green Machine is averaging 35 runs per innings in BBL09, with three fifties from his 12 knocks. Ferguson needs to lead from the front and deliver another big one in Hobart.

Qais Ahmed top Hurricanes wicket-taker @ $3.40 with Bet365
Slow bowlers have taken lots of wickets in BBL09, and Qais Ahmed is amongst the best young spinners going around. Qais took a handy wicket last time these teams met, but he will want to exert himself more on the contest now that the Hurricanes are falling lower on the BBL ladder.

Chris Morris top Thunder wicket-taker @ $4 with Bet365
Despite only playing in 10 games this season, Chris Morris is one of the league’s most effective bowlers. The South African allrounder’s tally of 14 wickets places him inside the top five wicket-takers in BBL09, with teammate Daniel Sams topping the list.

Hobart Hurricanes to win @ $1.71 with Sportsbet
The combination of D’Arcy Short and Matthew Wade is what the Hurricanes would have wanted from the first match. It remains to be seen whether it is too little, too late for Hobart, but the men in purple should win at home and keep their season alive.